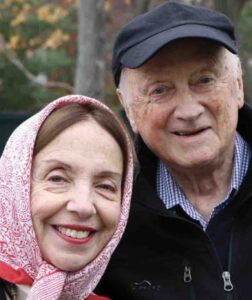 New Haven, CT – A new scholarship fund by the Connecticut Architecture Foundation (CAF) that honors Pritzker Prize recipient, architect Kevin Roche and his wife Jane, has been established by the couple’s children to celebrate their parents’ historic contributions and support architecture students as they step into architecture and design careers.

Monetary donations are encouraged to the scholarship that will award money in 2023 and annually after that to select students who have completed two years in accredited undergraduate architectural programs or have been accepted into an accredited graduate program.

“The Roche family’s creation of this scholarship fund in celebration of their parents’ significant architectural contributions is commendable,” says Jay Brotman, AIA, board member of CAF, and managing partner of Svigals + Partners. “We are enthusiastic supporters of CAF and the influential work of Kevin Roche. His passing in 2019 reminds us of the power of exceptional architecture and the importance of supporting new talent in the field.”