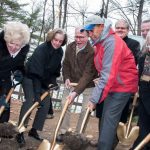 Ostrow Electric is serving as the project’s general contractor on the design-build project, and Solar Design Associates LLC of Harvard is working as part of the Ostrow team.

The solar installation is expected to power the new visitor center and the rest of the park. The center will be a near net zero energy facility and a model of green technology, designed to achieve LEED Silver certification.

The project’s first phase will begin in the early spring of 2015 and be completed by late summer or early fall. 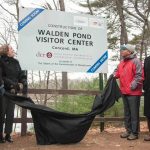 The renewable and energy conservation project at the landmark site supports the governor’s commitment to growing Massachusetts’ renewable energy capacity and improving recreational opportunities for residents and visitors.

“As the birthplace of the conservation movement, Walden Pond is an important natural landmark for the Commonwealth and nation,” said Governor Patrick. “These improvements are about good stewardship for this generation and the next.”

“Under the leadership of Governor Patrick, Massachusetts is once again on the cutting edge of environmental protection and clean energy technology,” said Executive Office of Energy and Environmental Affairs Secretary Maeve Vallely Bartlett. “The construction of the new visitor center at Walden Pond highlights the Patrick Administration’s investment in our parks, open spaces and public resources.”

The new building will feature interior and exterior exhibits, public bathrooms and larger meeting and administration space.  The project also includes pedestrian safety improvements and greater accessibility for people of all abilities.

“The Department of Conservation Resources is committed to investing in our parks and facilities across the Commonwealth,” said DCR Commissioner Jack Murray. “The improvements to DCR’s Walden Pond will lower operational costs, be more energy efficient, all while creating a world-class visitor center that will be enjoyed by visitors from around the world..”

“The new Walden Pond Visitor Center will be a shining example of the Patrick Administration’s commitment to constructing state of the art buildings, reduce energy costs for decades, and support our environmental goals,” said DOER Commissioner Meg Lusardi.  “Zero net energy buildings are the next frontier and the Commonwealth is at the forefront of this incredibly exciting national movement.”

“NECA Boston, Ostrow Electric, and Local 103 are proud to be part of this landmark Walden Pond project in our ongoing commitment to be at the forefront of renewable energy installations in Massachusetts,” said NECA Boston Executive Manager Glenn Kingsbury.