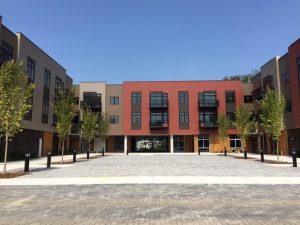 Concord, MA – A ribbon cutting ceremony was held last Friday to celebrate the opening of Brookside Square, a transit-oriented, mixed-use development that consists of 74 luxury apartments and 36,000 square feet of first class commercial and office space within a short walking distance to the W. Concord Commuter Rail Station. Developed by Oaktree FX, a partnership between Cambridge-based Oaktree Development LLC and Patrick Cleary of FX Investments, the project was hailed as a model of smart growth development at last year’s groundbreaking ceremony by formerMAHousing and Economic Development Secretary Greg Bialecki, and former MassDOT Secretary Richard Davey.

“We hope that Brookside Square will serve as a model for other developers seeking to create green, transit-oriented, mixed-use developments,” said Gwendolen Noyes, senior vice president of Oaktree Development. ““The complex is right on the rail with easy access to Boston and Cambridge, and is a short walk to shops and restaurants as well as walking and biking trails. Brookside Square is the epitome of the Live, Work, Play concept.” 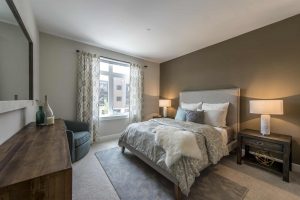 The ceremony was attended by approximately 75 people, including MA State Senator Mike Barrett; Gwendolen Noyes, Arthur Klipfel and Patrick Cleary of Oaktree FX Development; John Boynton of The Boynton Company; representatives from WinnResidential, The Architectural Team, and Tocci Building Companies; and other key development personnel as well as residents and town officials from the Town of Concord. “From the onset, this has been planned with one eye on its carbon footprint,” said State Senator Mike Barrett, D-Lexington.  “Easy access to public transportation, intersections with an emerging rail trail, walkable distances to local shopping, and the utmost in energy efficient construction – it’s all here.”

Oaktree’s design permit plans featured its “GreenStaxx” system for pre-designed, energy-efficient apartments.  TAT is the architect of record, and Tocci Building Companies was the construction manager. The rental apartments consist of a mix of studio, one and two-bedroom units priced from $1755-$3265. Amenities include an underground parking garage, a community room with a gas fire place and Wi-Fi Access, a fitness center, and a community deck overlooking picturesque Nashoba Brook.  Located just steps from West Concord Village shops and cafes, Brookside Square is now 70 percent pre-leased and residents are beginning the move-in process. The property is managed by WinnResidential. “Our Greenstaxx system for pre-designed, energy efficient housing in Smart Growth locations has been wonderfully honed at Brookside,” said Oaktree’s Klipfel. “We’re delighted that this project has been so enthusiastically welcomed by both new residents and the community.”

The 36,000 square feet of office space is over 50 percent pre-leased, pending permits for each individual tenant buildout by the Town of Concord. Jack Kerrigan and Bill Sullivan of Avison Young are handling the leasing assignment.  “We are working with an exciting and diverse mix of business owners who have recognized the advantages that Brookside Square offers for the success of their business and the happiness of their employees,” said Cleary.  “We have found that business owners are looking for more than remote office parks off highway exits can offer. It is truly unique in this regard.”