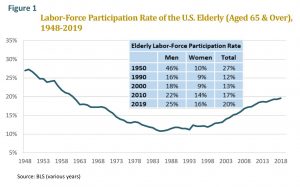 National – A new paper jointly released by The Concord Coalition and the Global Aging Institute (GAI) argues why extending work lives is an essential part of any workable strategy for addressing America’s aging challenge. The paper is the second in a quarterly series of issue briefs called “The Shape of Things to Come” that explores the implications of the aging of America.

Key findings of the issue brief include:

America has already made a start at extending work lives. After falling steeply from the 1950s through the 1970s, the elderly labor-force participation rate bottomed out in the 1980s and 1990s and has since then been rising steadily.

The paper, “The Case for Longer Work Lives,” can be found here.