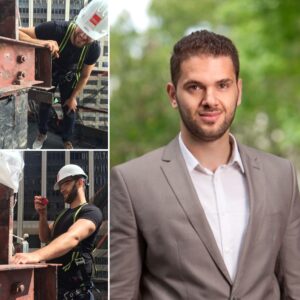 New York – Hoffmann Architects, an architecture and engineering firm specializing in the rehabilitation of building exteriors, announces that Taulant (Tai) Mahmuti, PE, with the New York office, has earned a promotion.

Mahmuti has been promoted to senior engineer and has accepted the firm’s offer of joint ownership. This month, Mahmuti will become one of 17 co-owners of Hoffmann Architects, contributing his voice to shaping the direction and future of the company.

Since joining the firm in 2015 as project coordinator, Mahmuti rapidly advanced in his career, moving to senior project coordinator, project manager, and then to project engineer within three years, in recognition of his initiative, leadership, and demonstrated expertise in building envelope systems.

Mahmuti earned a Bachelor’s Degree in civil engineering from Carleton University in Ottawa, Canada. He specializes in existing structure analysis, repair design, and energy performance improvements, as well as development of protocols for laboratory and field-testing of building enclosure elements.

Known for his close rapport with colleagues, Mahmuti has built long-term relationships with a number of clients. For over five years, he has partnered with Hoffmann Architects’ president, Russell M. Sanders, AIA, to complete multiple projects at the Scholastic headquarters in SoHo, New York, including roof replacement, storefront design, vault structural rehabilitation, and facade restoration.

Mahmuti has also worked with The Bank of New York Mellon for over three years on a variety of projects, including a roof replacement, sidewalk replacement, NYC Facade Inspection Safety Program investigation, and curtain wall assessment. In addition to the rehabilitation of existing buildings, Mahmuti provides new construction building enclosure consultation services, including at Greenwich West in New York, where he has worked as enclosure consultant since 2016, designing below-grade waterproofing, facade systems, and roofing, as well as providing energy analysis of various assemblies. Additionally, he has worked on six projects at Columbia University, most recently undertaking comprehensive utility tunnel and pedestrian bridge inspections throughout Morningside Campus.

An experienced writer and presenter, Mahmuti has published articles in The Construction Specifier, Building Design+Construction, and ENR New York, as well as in the Hoffmann Architects JOURNAL. Recently, he also presented a webinar on the New York City Energy Conservation Code for The Building Owners & Managers Association of Greater New York (BOMA New York). In addition to his professional engineer certification, Mahmuti is a Leadership in Energy and Environmental Design (LEED) Green Associate.