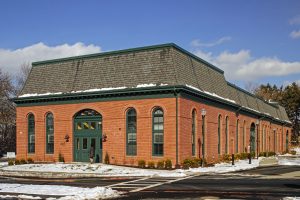 The Mystic Water Works, also called the Mystic Pumping Station, was built in 1865 as a rectangular, brick building in the Romanesque Revival style with a mansard roof, set upon a granite foundation.  A significant example of a mid-19th century waterworks facility, the structure is listed on the National Register of Historic Places. It served the area as a water supply until 1912, was used as office space during World War I, and later repurposed as a machine shop.  It subsequently sat vacant for several decades.

In 2017, Colantonio converted the building into 25 one-bedroom units of affordable housing, with common areas and laundry facilities. The firm replaced the existing interior with an entirely new, 24,000sf, two-story structure with a partial basement. The new, energy-efficient windows were designed to preserve the property’s historic character.  Other sustainable elements include an efficiency heat pump system; an energy recovery unit to reduce heating and cooling loads; LED lighting throughout; and the use of spray foam insulation to further reduce energy costs.

The rehabilitation not only created homes for low-income elderly residents of Somerville, it restored a highly visible abandoned historic building to its former glory and completed the Capen Court campus for the elderly and disabled.