Boston – MassDevelopment has provided an $800,000 loan to Eagle Mill Redevelopment, LLC, which is using proceeds to redevelop the former Eagle Mill and surrounding parcels in Lee into a mixed-use complex featuring 128 residential housing units and 14,000sf of retail and office space.

The developer used loan proceeds and additional financing from Adams Community Bank to buy 10 adjacent properties that will be combined and subdivided into six separate parcels for future redevelopment. Construction on the project, which is expected to cost a total of approximately $55 million, is slated to begin in the fourth quarter of 2021 with its first phase completed within 14-18 months. 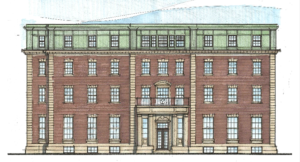 MassDevelopment also issued a $10.5 million tax-exempt bond on behalf of Cabot Housing LLC, an affiliate of the YMCA of the North Shore, Inc. The organization will use bond proceeds to buy and renovate a three-story, 45-unit housing facility at 245 Cabot Street in downtown Beverly, including adding a fourth floor that will allow for a total of 67 studio units. The existing 45 units, previously single-room occupancy units, will also be converted to studio apartments with added private bathrooms and kitchenettes.

Built in 1911, it was updated in 1999 as part of a historic renovation by the Department of Housing and Community Development. Ten of the units will be rented to formerly homeless individuals, and a new full-time caseworker will be available for residents to help with accessing services. Eastern Bank purchased the bond. 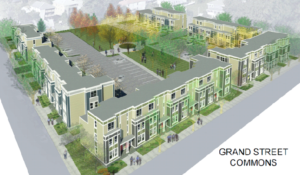 In addition, MassDevelopment has awarded $257,800 from the Brownfields Redevelopment Fund to the Main South Community Development Corporation (CDC), which is using proceeds to assess and remediate a vacant lot at 92 Grand Street in Worcester’s Main South neighborhood.  Grand Street Commons will be a mixed-use facility that will feature 48 units of mixed-income rental housing and ground-floor commercial and retail space.

The 90,000sf property, which has been vacant since 1960, was once part of the industrial-era Crompton Knowles and Standard Foundry mill complex. The property subsequently served as a makeshift parking and container storage lot for adjacent businesses, and the Main South CDC purchased the site in 2018. Construction for the $18 million Grand Street Commons began in February.