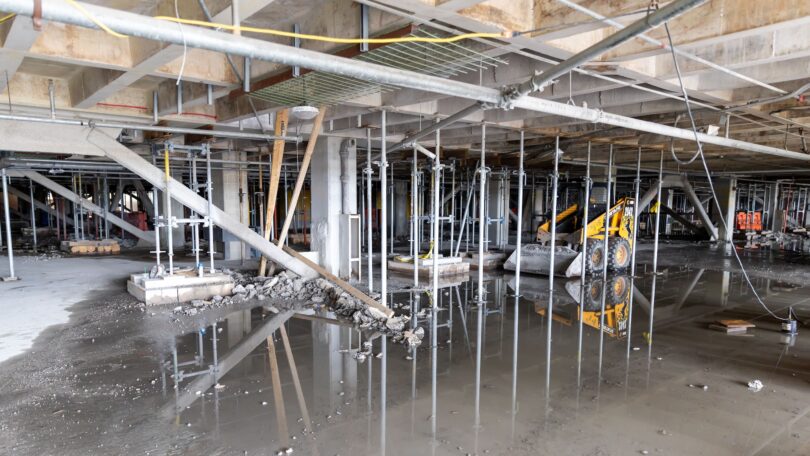 Boston – As part of UMass Boston’s 25-Year Campus Master Plan, the university is undergoing a physical transformation on its Harbor Campus located on the Columbia Point peninsula in South Boston. The project addresses issues from the original 1974 construction that involves demolishing buildings, and permanently stabilizing other existing structures to preserve their integrity. Contracted by Heritage Restoration, Marr Scaffolding Company’s (MSC) Shoring Division is shoring the structural beams of an existing parking garage servicing both Wheatley and McCormack Halls. The shoring will support renovation work on two levels of the garage, which also accommodate pedestrian access to the science center. 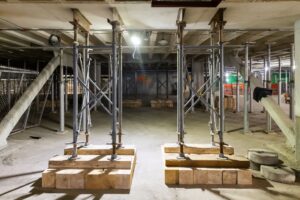 Over 385 shoring towers and 1,400 post shores have been installed for Heritage Restoration.

Since late July, MSC’s Shoring Division has installed 385 shoring towers and 1,400 galvanized post shores inside the parking garage using a combination of shoring systems. Engineered by Marr, a variety of shoring tower setups are being erected throughout the structure with load capacities ranging from 10,000 – 55,000 pounds. Isaac Blair, Marr’s specialty shoring company, is providing cribbing to support the towers, which include over 2,500 pieces of structural timber of varying lengths.

Engineered by Marr, a variety of shoring tower setups are being erected throughout the structure with load capacities ranging from 10,000 – 55,000 pounds. Marr’s specialty shoring company Isaac Blair is providing cribbing to support the towers, which includes over 2,500 pieces of structural timber of varying lengths.

Extensive planning to install the equipment throughout the 200,000sf space has been required due to concurrent demolition work and concrete repair. As a result, Marr is installing the shoring in phases in four locations.