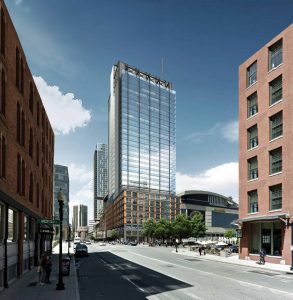 Hub on Causeway / All renderings by Delaware North/Boston Properties 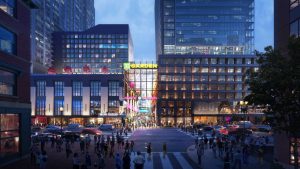 Boston – Officials from Delaware North, Boston Properties, the city of Boston, the state of Massachusetts, and over 200 community members celebrated the official groundbreaking of The Hub on Causeway development at a ceremony recently on the site of the former Boston Garden on Causeway Street.

Delaware North and Boston Properties have formed a partnership to develop over 1.5 million sf of mixed-use retail, office, hotel, residential, and an expansion of TD Garden on the 2.5-acre site. This transit-oriented development is a significant investment that will bring substantial improvements to North Station, will create major economic impact for the area, and strengthen the viability of this important district in the city of Boston.

The Hub on Causeway will be constructed in three phases. Phase 1 will consist of 210,000sf of multilevel retail/restaurant space, including the city of Boston’s largest supermarket, a 60,000sf Star Market, and the Northeast’s first ArcLight Cinema, ArcLight Boston, a 60,000sf 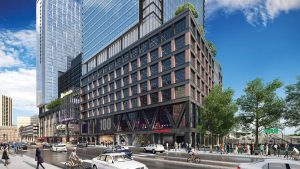 The Hub on Causeway – Rendering

theater with 15 screens; 10,000sf of outdoor space for a new entrance to TD Garden and North Station; 540 spaces of below-grade parking which will be connected to the existing North Station garage; 64,000sf of expansion space for TD Garden on floors 3 to 9; and 175,000sf of creative office space. (Square footage numbers are approximate.)

Phase 1 is expected to be completed in three years, with an opening in late 2018. Upon completion of Phase 1, there will be a covered, underground connection from the commuter rail to the subway at North Station, a new entrance to North Station via Causeway Street, and the public realm on Causeway Street will be complete.

Phase 3 will include an office tower including approximately 525,000sf in a 21-story tower.

“We are extremely proud to break ground on The Hub on Causeway – a project that will bridge the North End and the West End,” said Charlie Jacobs, CEO for Delaware North’s Boston Holdings. “The extensive planning process has truly been a City and community collaboration, as we worked together to identify the needs of the surrounding neighborhoods. The effort to bring a supermarket to the area is finally complete, and we are thrilled to have Star Market as our first tenant. At project completion, the development will provide numerous best-in-class retail and dining options, centered by a dynamic, breathtaking front door entrance to TD Garden and North Station.”

“The Hub on Causeway will be a great addition to the West End neighborhood, bringing thousands of jobs and a much-needed vibrancy to the area,” said Mayor Martin J. Walsh. “This development will have a transformative effect on the neighborhood, with housing, office space, a hotel, supermarket, retail and restaurant space being added. I thank all partners involved for their commitment to this project and I look forward to seeing it through to the finish line.”

“Delaware North is proud to partner with Boston Properties and the City of Boston on this transformational project,” said Jeremy Jacobs, Chairman of Delaware North and owner of the Boston Bruins. “The Hub on Causeway is the kind of transit-oriented development that we have always envisioned for the people living in this community, fans coming to the TD Garden, and commuters utilizing North Station. The project will change the landscape of Boston and will improve the quality of life for the residents in this neighborhood, and we’re proud to be leading that vision.”