Natick, MA – Fenagh Engineering and Testing recently opened a new, 10,000sf office in Natick to be close to its New England projects and attract a wider range of talent for its growing team.

The expansion is focused on creating lab space to support client needs including any future advancements in the materials testing field. This facility allows Fenagh to be the only company in New England that provides Modulus of Elasticity (MOE) testing. 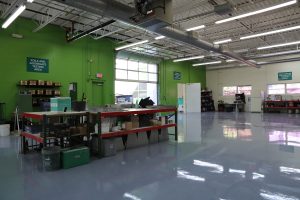 The new facility is divided between laboratory and office space.

The building is a major upgrade to its previous office in Boston with ample room for engineers and administrative personnel. The new facility is divided between 8,000sf of laboratory space and 2,000sf of office space. 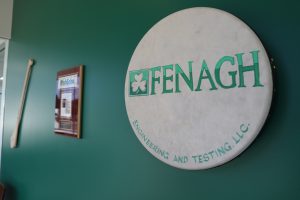 The front lobby immediately invokes the company’s Irish heritage with a wall display that includes a Fenagh-branded Irish hurling club and traditional Celtic Bodhran drum. Just to the left of the lobby, there is a glass-paneled, state-of-the-art conference room.

The building is divided between laboratory and office space with only a transparent wall separating the conference room and front lobby. All of the engineering stations are designed to promote a collaborative work environment and the lab space has been enhanced with new state-of-the-art equipment.