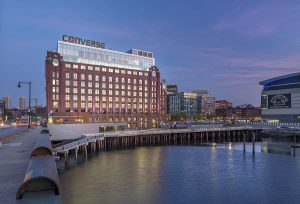 The Architectural Team is the master planner and architect-of-record for the new Lovejoy Wharf complex. In addition to designing the core and shell of the new Converse Headquarters facility at 160 North Washington Street, including its 2-story glass addition and terrace, The Architectural Team was the Architect working with Copley Wolf Landscape Architects for the 1-acre landscaped wharf structure which serves as a public amenity and attaches to and extends the Boston HarborWalk.

TAT was the Executive Architect for the exteriors of both the Converse retail store and the one-story recording studio, Rubber Tracks which sit on the wharf structure itself. The interior of the new Converse office, the conceptual design of the retail store, and the exterior of the recording studio were designed by Jennifer Carpenter Architect with Bargmann Hendrie + Archetype acting as Executive Architect.

RDK  provided MEP/FP engineering in turning 187,000sf of warehouse space into an innovative office structure. The new headquarters plays an important role in the renovation of the North End’s Lovejoy Wharf, the effects of which have extended throughout Boston.

The warehouse’s seemingly aged and neglected space retained an old-world look that recalled Boston’s rich history. Consequently, RDK and the design team were left with the challenge of preserving the original space while meeting the need for a progressive, high-tech workspace.

The exposed brick shell endures but has made room for an open design and an atrium. An open central staircase winds its way up nine stories, visually and literally connecting all employees. Other updates include customization and innovation labs, sample creation rooms and show rooms, a photo studio and design room, and a new fitness center complete with a yoga studio and locker rooms. The new ninth floor terrace offers a unique view of the Charles River while the entryway is lit-up by a Chuck Taylor sneaker chandelier.

Located near the historic Faneuil Hall and the North End, the new headquarter’s modern updates merge with the rich history of its surroundings.

Alongside the new office space, RDK also contributed to a new onsite retail store and to Rubber Tracks, a recording studio that supports local developing artists. Open 24×7, the art studio impacts the Charleston community by offering local talent a free space to practice their craft.

Likewise, Converse’s Somerville Annex shares an open communicative environment of the new headquarters with future customers. Each new product is first tested as a one-off at the Annex and the public is invited to help decide which product to promote.