Boston – Northeastern University is a global experiential research institution with its main campus located in the heart of Boston. The university’s research enterprise focuses on solving global challenges in health, security, and sustainability.

Suffolk Construction is currently managing construction on the approximately $225 million Interdisciplinary Science & Engineering Complex (ISEC) that will open by the end of the year. The 220,000sf structure will eventually include an impressive walkway that will literally bridge the gap between the Huntington 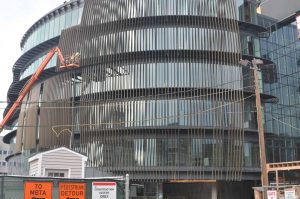 and Columbus Avenue sides of campus separated by train tracks. The bridge spanning the MBTA 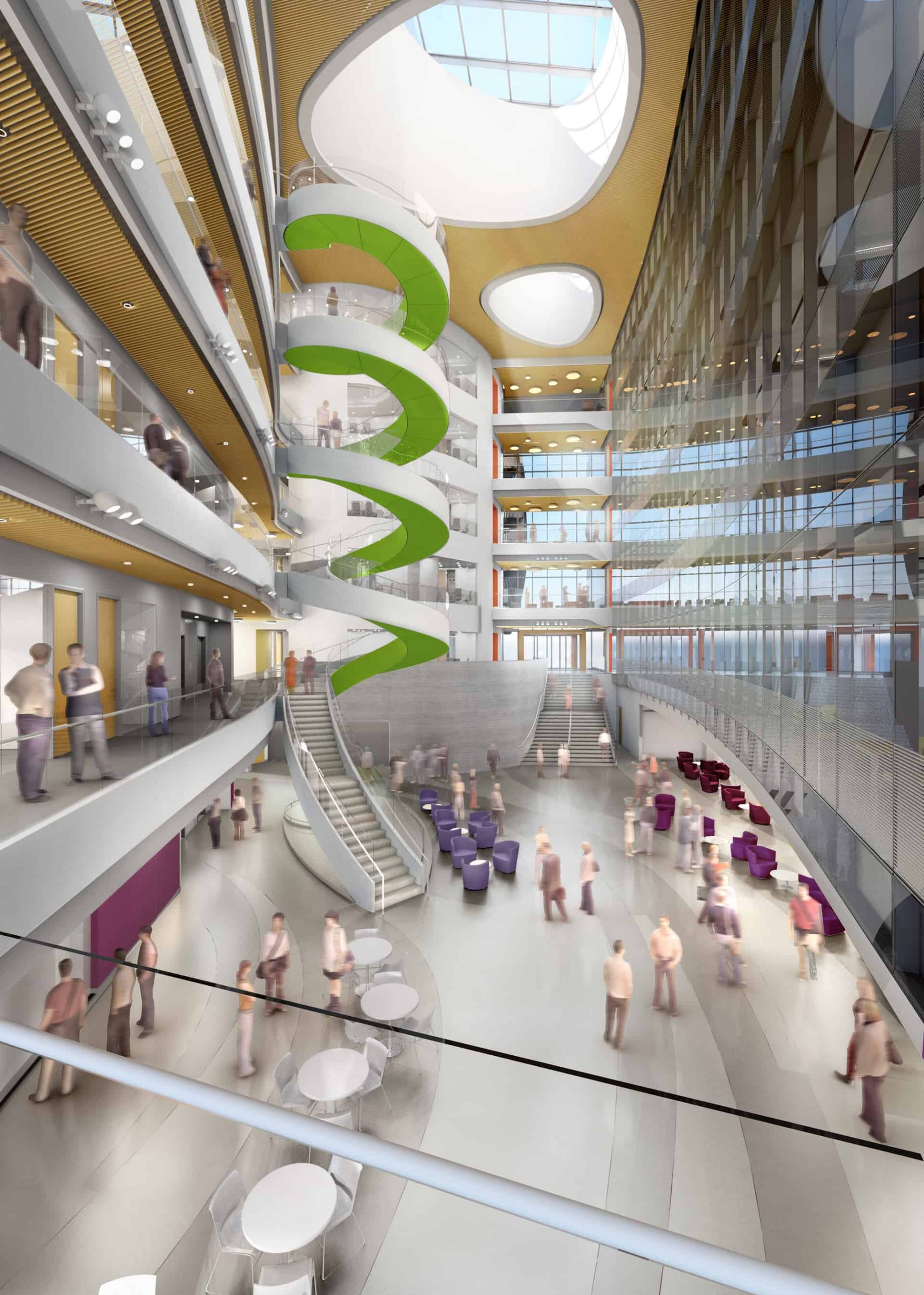 Commuter Rail, Orange Line, and Amtrak tracks will also connect to green areas that will be accessible to students, faculty, and the community at large.

This iconic building will also include state-of-the-art research facilities that will allow the school to foster collaboration across disciplines and continue to hire top faculty and academic leaders.

Designed by Payette, the structure has a distinctive curved curtain wall. The wall’s sun-shading system features a series of vertical fins that cast shadows inside the building’s rooms. This allows the building to save on energy that would normally be used to cool the building.

The inside of the building includes a massive steel staircase that will spiral up a glass-filled, six-story atrium. The atrium will double as an event space big enough to seat 200 people for dinner, and a 280-seat auditorium will also be built on the ground floor. The facility will also feature lab­o­ra­to­ries, class­room space, and offices for fac­ulty and grad­uate stu­dents.

Building such a magnificent facility, however, doesn’t come without construction constraints. The building is located less than 50 feet from the railroad tracks and approximately 35 feet from a parking garage.

Benjamin said they have to make sure building materials don’t fall onto the train tracks. That’s why cranes and man lifts are not allowed in the back alley. One solution has been to use a larger crane than would normally be on a project of this size. The 90-ton crane has a longer reach and helps the team lift materials to the top of the building.

“It adds a level of logistical planning of how you really access the other side of the building,” Benjamin said. “We’ve had to figure out ways to think creatively to make sure we could construct the building in a safe manner, not only for those on the project site but to make sure trains passing by aren’t in any danger.”

Another constraint is the fact that the MBTA is planning its own construction nearby. Benjamin said that means they have to make sure that the installation of sub-surface infrastructure is coordinated with the MBTA plans.

“We have to do that well in advance of when they are going to be conducting construction,” he said.

As Northeastern extends its campus into Roxbury, they are also making a commitment to the community. The workforce goals for the project are to employ 51% of Boston residents and 40% minorities on the job, which is much higher than the 25% required by the Boston Resident Job Policy (BRJP).

Another 10% of the workforce on the job are women, Benjamin said.

“This building is really going to be an anchor to the next phase of Northeastern’s Institutional Master Plan,” Benjamin said. “So it really is a significant project for the university, both in terms of building out their campus physically, but also in terms of relations with the community.”