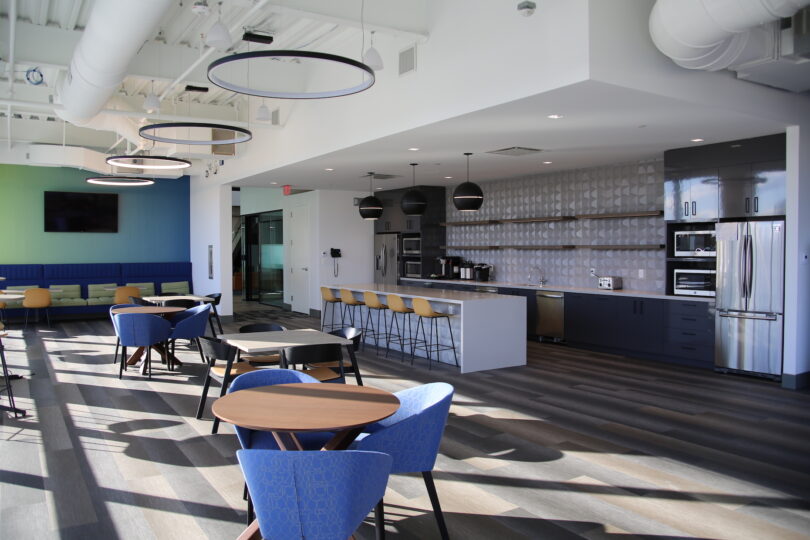 Westwood, MA – Lee Kennedy Co. has completed construction for the new 40,000sf headquarters of the Meketa Investment Group, a global investment, consulting and advisory firm with $1.4 trillion in assets under advisement.

Located at 80 University Avenue at the entrance to University Station in Westwood, the two-story office space was fit out in a new core and shell base building constructed by National Development.

Designed by Fusion Design Consultants, the new global headquarters features a waterfall staircase that connects the reception area in the front lobby to the distinctive cafe/coffee bar on the second floor. The main cafe also serves as an informal meeting space for employees to collaborate or socialize, and includes an outdoor patio.

The office layout consists of private offices and workstations, but also includes conference and huddle rooms and open space designed to encourage impromptu exchanges of ideas. The private offices incorporate sliding glass doors to maximize space while allowing for more natural light to permeate the office area. Given the confidential nature of Meketa’s business, much attention was paid to acoustic privacy through design and construction, which incorporated double glazed glass for additional privacy in conference rooms and other key locations.

Owner’s Project Manager JLL brought the team on early during the base building construction process to help advise the builders of their fit-out plans as a way to reduce overall costs, such as leaving the stairwell area unfinished and the slab on grade open to accommodate underground electrical and plumbing. Due to the impact COVID has had on the corporate office market, Meketa opted to set aside 5,000sf of the 40,000sf building to offer as temporary sublease space. The team was able to quickly accommodate the change, giving Meketa flexibility while still hitting the targeted move-in date.

Although the pandemic delayed the start of the project due to the state-wide ban on construction, Lee Kennedy was able to hit the ground running on May 26, the day Governor Baker lifted the ban. During the shutdown, Lee Kennedy developed extensive COVID-19 safety protocols, and recorded zero cases during the course of the buildout, allowing the project to proceed as scheduled.