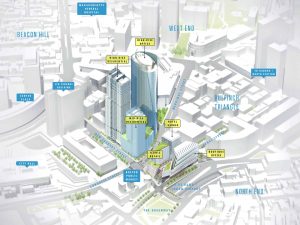 Boston – National Real Estate Advisors and The HYM Investment Group recently won final approval for two towers on the site of the Government Center Garage, the first phases of a six-building, $1.5 billion redevelopment plan to replace the 1960s-era Brutalist garage.

The project will include housing, offices, a hotel, retail, and other public amenities, including bringing daylight to a block of Congress Street for the first time in half a century.

Following years of planning, design, and extensive meetings with local residents, the Boston Redevelopment Authority Board of Directors unanimously approved:

At full build-out, the project will include 812 residential units, 196 hotel rooms, 1.1 million sf of office space, and 85,000 sf of new retail that will activate the area and complement the adjacent, established surrounding neighborhoods.

In addition to the two approved towers, HYM and National are planning three modest-scale buildings surrounding a new public plaza on the eastern side of the parcel, abutting the Rose Kennedy Greenway, including a hotel-and-condo building, a boutique office, and a multistory retail space, reestablishing a prominent central gathering point in downtown Boston near old Haymarket Square.

A sustainable and transit-oriented redevelopment, the project is centrally located, two blocks from North Station and Storrow Drive, next to I-93, and integrated with the MBTA’s Haymarket Station, including Green and Orange Line trains. The project will feature a one-acre green roof deck, an unmatched amenity in the city of Boston, and will have the largest area for bicycle storage and meeting cyclists’ needs of any location in Boston.

Once construction starts on the office tower, the existing garage will be demolished, including the prominent section that spans Congress Street and all floors extending east over the Haymarket MBTA Bus Station. Approximately 1,100 parking spaces of the existing 2,300-car garage will be retained, enveloped by the office tower and two residential buildings at project completion. This reconfigured garage will provide parking for the new development as well as daily parking, overnight resident parking, and event parking.

“We are humbled by the historic opportunity that this project presents,” said HYM founding partner and managing director Thomas N. O’Brien. “This project will reconnect four of Boston’s greatest neighborhoods — the North End, the West End, Beacon Hill, and Downtown — that have been divided by this hulking concrete structure for decades. This area of Boston is undergoing a tremendous positive transformation, all of which are accelerating, including transit improvements, the Greenway, and the new Boston Public Market. We also have beautiful Back Bay and Harbor views as well as proximity to Massachusetts General Hospital, Kendall Square, and the Financial District.”