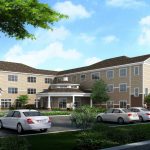 Cornerstone at Canton, an assisted living and memory support residence located in Canton, is the second in a series of senior living projects that CAI, working in concert with SPL Development Group, LLC, developer; Udelsman Associates, architect; and Senior Living Residences, LLC, marketing and management partner; intends to complete over the next several years.

Ground was broken in June 2014 for the new 70,000sf Canton project that will provide a total of 91 beds – 24 for Alzheimer’s residents and 67 for assisted living residents. CAI will develop the interiors to appeal to the interests and tastes of the greater Canton community while reflecting the values that the owners wish represented to the community, the residents, and their families.

In addition, CAI will be working with architect Richard Alvord Architects of Roslindale, and the Canton Council on Aging on the Canton Senior Center, a project that will renovate a former Knights of Columbus hall with the goal of making it a functional and updated environment appropriate for the seniors of Canton.

Completion of the 6250sf project is scheduled for autumn 2014.