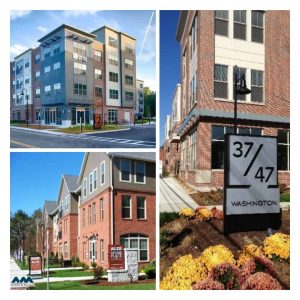 Manchester, NH – A decade of transformation started in 2008, when the city of Melrose created a smart growth overlay district on Lower Washington Street that opened the way for new transit-oriented development.

Allen & Major Associates, Inc. (A&M) was there at the beginning, to provide land survey, civil engineering, and environmental permitting for four projects to date totaling 394 residential units. The new zoning has transformed this area into a mixed-use destination of both luxury apartment communities and local retail destinations, all located steps from the Oak Grove MBTA Orange Line station.

In June of 2009, A&M received site plan approval to redevelop almost eight acres in the former industrial district into a residential complex, including construction of four new buildings and the rehabilitation of two existing mill buildings.

The project, originally called ALTA Stone Place and now known as Jack Flats, was the first project completed by A&M. The site was the former home of the Boston Rubber Shoe Company.

The centerpiece of the project is the mill’s landmark 100-year-old eight-story brick smokestack, that was preserved and incorporated into the apartments as a centerpiece of a new landscaped garden area. Due to the history of the site, and its location within the heart of Melrose, multiple permits were required.

Outside of the residential components of the overlay district, A&M completed Little Sprouts Daycare located at 40 Washington Street in 2015. As part of the multiple projects, A&M worked with the city of Melrose and its public works department to provide roadway improvements, utility upgrades, sanitary sewer and stormwater improvements of both Washington Street and Stone Place.

A&M anticipates future projects will develop within this area in the coming year in response to the never-ending demand for housing close to Boston.