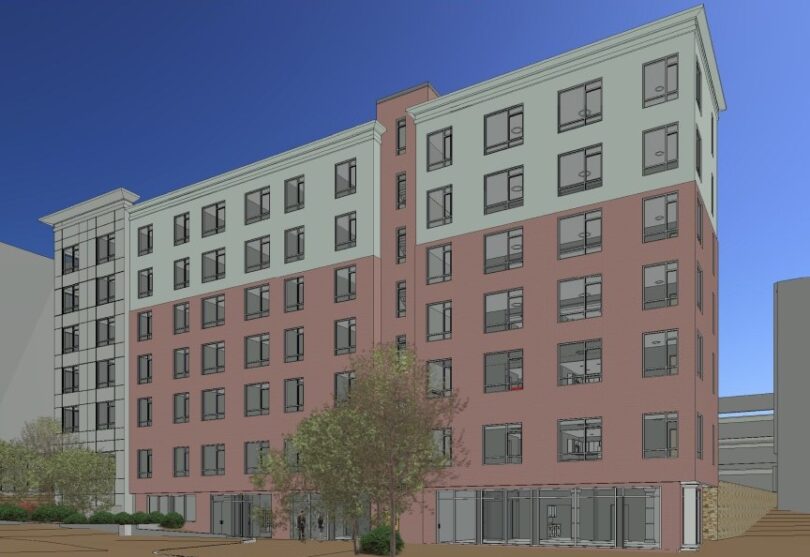 Worcester, MA – MassDevelopment has issued a $19,640,000 tax-exempt bond on behalf of 120 Washington 4 LLC, an affiliate of Boston Capital Development, LLC, which will use proceeds to construct 59 units of mixed-income affordable rental housing at the site of the former headquarters of Table Talk Pies at 120 Washington St. in Worcester.

The project is part of the larger mixed-use redevelopment of the four-acre site that will include a total of 400-plus residential housing units and 20,000sf of commercial space. Construction is underway and is expected to be complete in February 2024. Eastern Bank and Rockland Trust purchased the bond, which helped Boston Capital Development, LLC achieve a lower cost of capital.

At 120 Washington St., Boston Capital Development, LLC will construct a unit mix of six studios, 28 one-bedroom, 44 two-bedroom and five three-bedroom apartments. In addition to the 59 units supported by MassDevelopment bond financing, 24 additional units will be financed with an allocation of Low Income Housing Tax Credits, additional subsidies from the Department of Housing and Community Development, and conventional bank financing. Additionally, in October 2022, the Baker-Polito Administration awarded a $400,000 grant from MassDevelopment’s Underutilized Properties Program to help Boston Capital Development, LLC advance a portion of the larger project at 120 Washington St.

“Projects like this are made possible by key collaborators such as MassDevelopment,” said Worcester city manager, Eric Batista. “This particular site located next to Polar Park is crucial to unlocking the full potential of the Canal District by bringing much needed housing including affordable units to the neighborhood.”

The site served as the headquarters of Table Talk Pies from 1924 until January 2022, when the company relocated its production and distribution facility to an industrial area within Worcester. Table Talk Pies’ new bakery and corporate office is now located in the former Worcester Main South TDI District, which is an area previously served by MassDevelopment’s Transformative Development Initiative (TDI), a program designed to accelerate economic growth within focused districts in Gateway Cities.