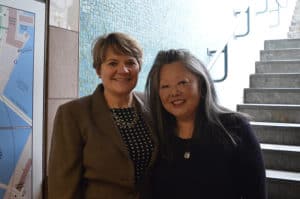 The piece, titled NETWORK, is the result of 12 years of hard work by WTS-Boston and its Public Arts Committee,  co-chaired by Lisa A. Brothers, PE, ENV SP, LEED AP BD+C, chairman & CEO of Nitsch Engineering, and Hyun-A Park, president of Spy Pond Partners.

NETWORK, located in the headhouse entrance to Boston’s South Station at the northeast corner of Summer Street and Atlantic Avenue, highlights the transportation network that WTS members have helped build. 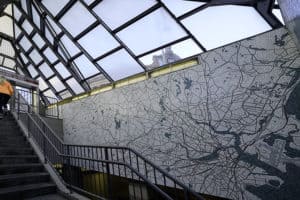 The mosaic map includes a gold dot to represent South Station, with various shades of grey used to show roads (light grey), railroads (medium grey), and subways (dark grey). Blue and green tiles show waterways and the ocean, recognizing the natural water transportation network. Three mermaids are hidden in the ocean, working together to survey the land across from them, while representing the often-hidden ways in which women have historically contributed to the transportation industry.

“When WTS-Boston had the idea in 2007 to commission a piece of public art to celebrate women in transportation, I was excited to participate in a unique public-private partnership between MassDOT, the MBTA, and WTS-Boston, that would have a positive impact on such a wide group of people,” said Brothers. 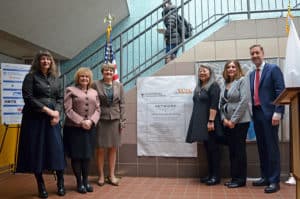 “As co-chair of the Public Art Committee since the beginning, I’ve had the opportunity to work with an amazing team of volunteers to secure funding, create the 501(c)3 WTS-Boston Charitable Fund, issue a call for artists that received 195 entries, and work with Ellen Harvey to bring our vision to life. I’m proud to have been a part of this amazing project and look forward to (hopefully) bringing my future grandchildren to South Station to show them what a team of dedicated and thoughtful volunteers can achieve,” Brothers added. 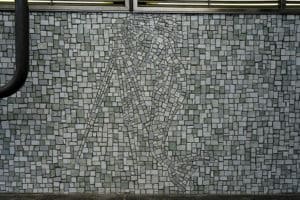 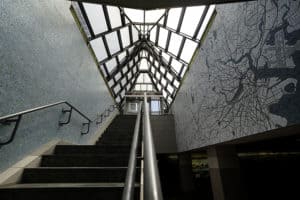 Jean Mineo served as the public art consultant. NETWORK was fabricated and installed by Miotto Mosaic Art Studio in collaboration with Travisanutto Giovanni SRL. Structural engineering assessment was provided by Stantec and general contracting was provided by SPS New England.