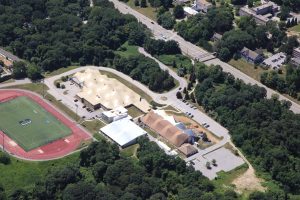 When it comes to ice hockey teams, the Connecticut College Camels are downright intimidating. But this past summer, the Dayton Arena design and construction team faced an even more daunting challenge: re-roofing a hyperbolic paraboloid roof in time for the first game of the season.

The average person probably couldn’t describe a hyperbolic paraboloid roof, although she’s likely seen one before. Often the roofs of choice for churches, fieldhouses, and other buildings that require large spaces unencumbered by columns, these designs appear at many distinguished Northeast institutions, including Connecticut College, Amherst College, and Brown University.

Achieving large interior clear spans made the hyperbolic paraboloid roof type a good fit for the Dayton Arena hockey rink at Connecticut College. But time takes its toll on all structures, and this was no exception.

“The roof was last replaced in the 1990s,” said Michael Guidera, project manager at KBE Building Corp. “Not only was it necessary due to the age of the existing roof, but this was also a good opportunity for Connecticut College to retain the benefits of this versatile roof type.”

The hyperbolic paraboloid roof also has a special significance for Connecticut College.

“This roof design was invented in the 1970s by architect and engineer Daniel F. Tully, who was also the original designer of the Dayton Arena roof structure,” said Thomas Gribbin, president of Noyes Vogt Architects and lead architect on the project. “So the re-roofing pays homage to him in addition to being exactly what the Dayton Arena needed to mitigate leaks.”

Even with a talented construction team, re-roofing a 30,000sf hyperbolic paraboloid roof is nothing to shake a hockey stick at. First, team members had to remove the existing two layers of shingles, made of asphalt and fiberglass. That process also included the painstaking removal of longer-than-normal nails.

“Removing those longer nails not only required more leverage, but it also added considerable time to the project,” said Guidera. “A half-second per nail versus several seconds per nail adds up when you’re talking about a million nails.”

To fit the new roof, the construction team then had to individually cut strips of PVC membrane tapered to various dimensions, depending on where the strips were being placed. And the challenge didn’t end there.

“Because of the roof’s structure, all work had to be done from lifts rather than on top, which was tough because some parts of the roof were almost vertical,” said Guidera.

KBE assembled a great team to ensure success: The firm worked with roofing contractor Offshore Roofing on the installation and to determine the ideal placement for the vapor barrier. As well, an engineering firm was on call throughout the project (although its services were not needed). “All of our team members did such a great job,” Guidera said. “The peace of mind we got from having such a solid team made a huge difference.”

In addition to the roof’s structural integrity, great design ensured an aesthetic match with a nearby athletic fieldhouse and natatorium in addition to high energy-efficiency. “This roof type originated in the 1970s, but we wanted to bring it into the 21st century with a focus on unity and sustainability,” said Gribbin.

Clearly, delivering the Dayton Arena’s new hyperbolic paraboloid roof has been a team effort, with the project completing in early October 2015.

The happiest party of all? Connecticut College’s ice hockey players, says Guidera. “We’re glad that the Camels can get back to focusing fully on hockey.”