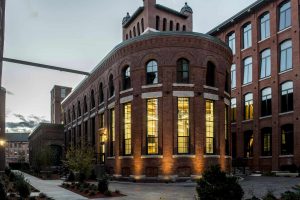 Lawrence, MA – WinnDevelopment, the development arm of WinnCompanies, a national property development and management company, recently celebrated the completion of the second phase of Loft Five50. The 120,000 square-foot mixed-income apartment complex in Lawrence, Mass., was developed from four buildings on the historic Malden Mills manufacturing site.

Phase 2 brings 62 units of affordable housing to the property. Fifty-five units are available to residents earning at or below 60% of Area Median Income (AMI) and seven units are reserved for residents with incomes at or below 30% of AMI. It is fully occupied, with final move-ins scheduled for early December. More than 630 qualified applicants participated in a lottery for the 62 units. Today, there are more than 200 on a waiting list for vacancies.

“It is gratifying for us to partner with the state and the city to contribute another important step forward in the revitalization of Lawrence,” said Larry Curtis, President and Managing Partner of WinnDevelopment. “We’re honored to have the opportunity to put these beautiful, historic buildings back to work to as an asset to the community and as a wonderful place to live and raise families.”

“Projects such as Loft Five50 that offer affordable and stable housing are important for neighborhood revitalization, creating strong communities and empowering working families,” Kornegay said. “I look forward to our continued partnerships with municipalities, neighborhoods, communities and engaged citizens as we work on similar projects to improve housing access in Massachusetts.”

Said Mayor Rivera: “Our recently completed Comprehensive Housing Study demonstrates the need for additional housing in Lawrence. Developments like LoftFive550 play an important part in meeting that need. Phase 1 has been a huge success, and we are very pleased WinnDevelopment has continued its high quality work in Lawrence with Phase 2.”

Added Gleason: “WinnCompanies is one of our best business partners and not only do they have the expertise to turn underused properties like Malden Mills into vibrant mixed-income housing communities that transform neighborhoods, they create affordable homes for working families all across Massachusetts. Loft Five50 is just the latest example of this and we are pleased to be part of helping to create a valuable housing resource that is going to benefit the residents of Lawrence for many years.’’

The first phase of Loft Five50 opened in November 2012 when 75 apartment units were completed in the adjacent 160,000-square-foot former mill building. Seventy-two of those units are designated as affordable housing.

Approximately 100 construction jobs and four permanent jobs were created as a result of the Loft Five50 project. Keith Construction of Canton, Mass., was the general contractor and The Architectural Team of Chelsea, Mass., was the architect.

WinnResidential serves as the property manager for all 137 units in Loft Five50. The complex consists of modern loft-style studio, one, two and three-bedroom apartments, all with parking. Residents enjoy extensive on-site amenities including a large community room with kitchen and entertainment space, fitness facilities, a movie theater, and an indoor children’s play area.

Loft Five50 sits within what had been a 29-acre, nine-building manufacturing complex operated by three generations of the Feuerstein family. When a 1995 fire destroyed three of the buildings and displaced 1,400 workers, then-owner Aaron Feuerstein continued to pay his employees for 60 days, gaining national acclaim as an example of an altruistic corporate leader. This generosity garnered him the nickname as the “Mensch of Malden Mills.”

Despite a rebuilding effort completed in 1997, Malden Mills went bankrupt and the property was sold in 2007 to Versa Capital, which purchased the assets to create a new company, Polartec, LLC. WinnDevelopment acquired four of the mill buildings from Versa in July 2011 after they had sat vacant for more than a decade.

Loft Five50 is one of 28 adaptive reuse projects completed by WinnDevelopment in five states and the District of Columbia, transforming vacant historic properties into more than 3,100 units of mixed-income housing valued at $500 million.