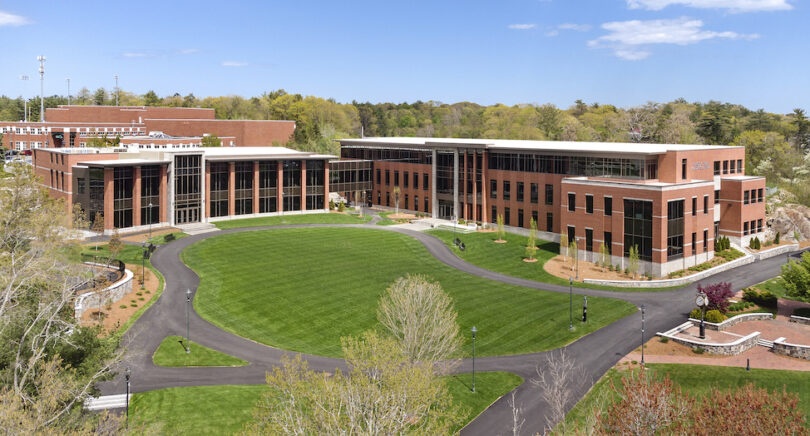 Beverly, MA – Windover, in a design-build partnership with Bergmeyer, recently completed the new Samuel C. Wax Academic Center at Endicott College in Beverly. Breaking ground in 2017, the multi-phased project brings a new academic and social hub to the heart of the coastal campus. 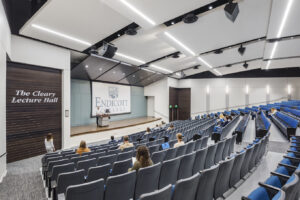 The project was completed in two phases. The first phase of construction occurred adjacent to the existing 1970s Wax Center which remained occupied until phase one was completed and students and faculty could move into the new building. The second phase then began with the demolition of the existing Wax Center to make way for the second building. The two buildings are joined together by a connecting walkway. 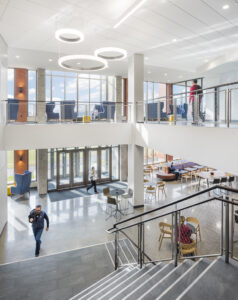 Technology was used throughout the project to ensure quality, enhance communication to streamline decision making, and minimize risk. The project was also the first time an autonomous laser scanning and layout planning robot was used on a construction site. Windover collaborated with Autodesk and Nextera Robotics to develop “Oliver,” the first robot to do both autonomous laser scanning and utilities/wall layouts onsite directly from BIM data. Oliver was able to autonomously move around the uneven surfaces of the site to predetermined locations, scanning indoor and outdoor spaces to accurately measure and plan for walls and spaces, and freeing up the workers on-site to focus on more important tasks.

As the design-build lead, Windover worked in close partnership with Bergmeyer and the college to evaluate various options for the project, from the siting of each building to major program modifications that occurred during construction.