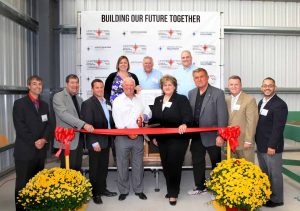 East Hartford, CT – United Steel Inc. welcomed Connecticut State Senator Gary LeBeau, East Hartford Mayor Marcia Leclerc, and other local and state dignitaries and partners in September to celebrate its 40th anniversary in business, and the ribbon-cutting ceremony of a 20,000sf addition to its facility in East Hartford.

The newly constructed manufacturing extension will increase efficiency and productivity at United Steel. The addition was coordinated and managed by United Building Solution, a division of United Steel that launched earlier this year.

Ken Corneau said that the pairing of the company anniversary and addition provide an opportunity to reflect on the company’s accomplishments and to look forward to continued growth.

Earlier in the day the company celebrated SteelDay, an annual event sponsored by the American Institute of Steel Construction and hosted by its members and partners.