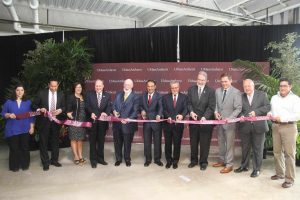 Amherst, MA – The opening of the Institute for Applied Life Sciences (IALS) at UMass Amherst was celebrated recently by Massachusetts life science industry leaders and state and university officials during a day-long event, celebrating a $150 million investment to bring new discoveries in healthcare services and products to market.

IALS is a life sciences laboratory research center that includes state-of-the-art equipment for research and development in collaboration with industry partners to develop new methods and technologies that may be translated into commercial services and products.

The institute is organized into three distinct centers:

To date, more than $20 million in IALS-related sponsored research awards have been secured, which includes more than 30 projects associated with industry collaborators. The investment in state-of-the-art equipment is designed for use not only by UMass faculty researchers but also industry and academic partners.

IALS was initially funded by a $95 million investment by MLSC together with more than $55 million in investments by the university, contributing to the construction and fit-out of the Life Sciences Laboratories building designed for interdisciplinary research, student training and large-equipment facilities. The institute also fosters spin-out companies and seeks to become a catalyst for a biotechnology hub in Western Massachusetts.

Among those taking part in the launch ceremony were Senate President Stan Rosenberg, Ben Bradford, director of regional development strategy for the Massachusetts Life Sciences Center (MLSC), and UMass Amherst Chancellor Kumble Subbaswamy. Keynoting the event was Harvey Lodish, scientific advisor to Genzyme Inc. and Millennium Pharmaceuticals in Cambridge, and a member of the National Academy of Sciences.

Bradford of MLSC noted, “As Boston, Massachusetts and the world find out what we have here in Amherst, IALS’ stature will grow in life science research and accomplishment.”

IALS Director Peter Reinhart said he believes “IALS will be one of the instruments that makes life science advancement west of the 495 corridor real.” He said the institute aims to create new models of collaboration between university researchers and life science companies so that IALS becomes “the partner of choice” for them, with a focus on applied outcomes, a team approach to research and a pledge to rapid and easy technology transfer processes that move new ideas and products forward as fast as possible.

In his keynote address, Lodish, the founding head of the MLSC scientific advisory board that provided IALS its initial $95 million grant, congratulated the campus and IALS “on this great facility,” where researchers are on the cusp of “a whole brave new world of therapies with enormous promise but very high technical medical challenges.”

He said that the coming wave of personalized medicine, especially for treating rare diseases where we lack molecular understanding today, presents “a huge opportunity” for IALS researchers to develop new diagnostics, drugs and devices. Lodish said the effort requires “intense collaborations” between publicly-funded researchers who recognize the need to share what they know with the broader community to get new therapies through testing and into practice helping people. “And to do this, you need to work with companies,” he added.

In his welcoming remarks, Chancellor Subbaswamy said the campus is very grateful to the MLSC, the Legislature and Governor Baker for fostering “a true collaboration between the Commonwealth and our campus that led to us dedicating this outcome-focused, stunning state-of-the-art facility today.” He said each of IALS’ three centers promises to greatly contribute to advances in health and well-being and to spur economic development throughout the Commonwealth.