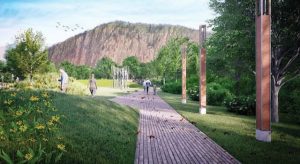 New Haven, CT – After years of advocacy and planning efforts, a partnership of concerned mothers in New Haven has teamed up with architecture and planning firm Svigals + Partners to design a memorial garden in honor of victims of gun violence. The memorial could be open to the public as soon as this summer.

Svigals + Partners has been working with the group pro bono since April 2018. The firm served as architect for the new Sandy Hook School in Newtown, Conn.

The design for the memorial garden provides a path flanked with engraved stone pavers for visitors to walk the site, as ambient sounds from a row of lamppost wind chimes mask traffic noise. The path leads visitors past an original work of sculpture titled the Lost Generation. The sculpture depicts abstract human figures which are revealed or concealed depending on where the viewer is standing.

The efforts to build the memorial originated with New Haven school teacher Marlene Miller Pratt, whose 18-year-old son was killed in 1988.

“When we were approached to assist with this particular project, we were eager to get involved,” says Julia McFadden, AIA, associate principal at Svigals + Partners. “This important work dovetails with our mission to create and support prosperous, compassionate communities.”

McFadden adds that while violence, and particularly gun violence, has diminished in the years since Pratt lost her son, the teacher grew dismayed with the apparent indifference of her community at large towards incidents of violence impacting families and neighborhoods locally. Pratt and the other mothers she works with on this effort hope the garden may serve as a place to honor and remember their loved ones while encouraging continued dialogue within the wider community on the roots of violence.

According to Marissa Mead, RA, LEED AP, Director of Art at Svigals + Partners and the design lead for the memorial, “The Lost Generation sculpture serves as a reminder of both the fragility and strength that exists within families and communities. Figurative voids in the piece illustrate the ever-present sense of absence when loved ones are lost to tragedy, and allude to the idea that death has a compounded influence on both current and future generations.”

The new Sandy Hook School project has cemented the firm’s reputation for working closely with communities of all kinds. Individually, both Mead and McFadden have worked on design and client engagement for large-scale memorials.

McFadden spearheaded a design team for a proposed Sandy Hook Memorial — her team placed second out of 188 submissions from around the world — and Mead is currently involved in the effort to create the Middle Passage Memorial in Newport, RI, honoring Africans whose lives were lost in the transAtlantic slave trade.