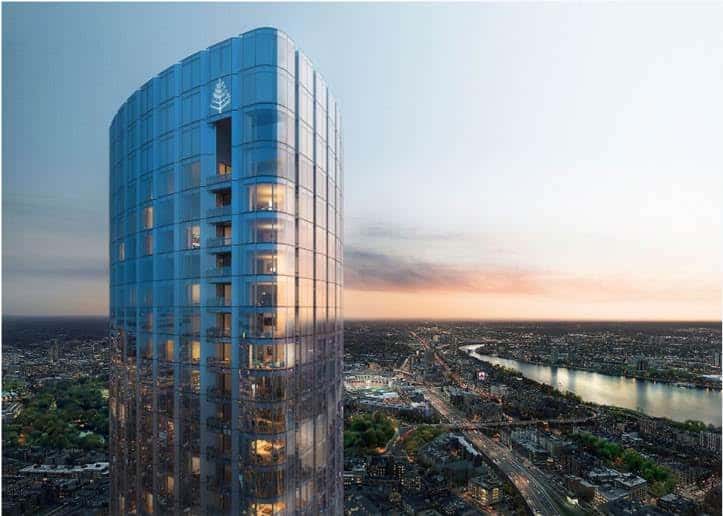 One Dalton / photo by Conor Doherty

Boston – Carpenter & Company announced that the Four Seasons Hotel & Private Residences, One Dalton Street, recently reached its full height at 742 feet, now the tallest building in all of Boston and New England, a major construction milestone that solidifies the tower’s transformative presence along the Boston skyline.

Built by Suffolk Construction, One Dalton is anchored 165 feet deep into bedrock and uses the world’s most advanced methods of skyscraper engineering and construction.

The architecture team is led by Henry N. Cobb of Pei Cobb Freed & Partners, who first designed the John Hancock Tower more than 40 years ago. Thierry Despont is spearheading One Dalton’s private residences lobby, and landscape architect Michael Van Valkenburgh, headquartered in Boston, has created a 5,000sf public park that connects the building with its surrounding neighborhood. 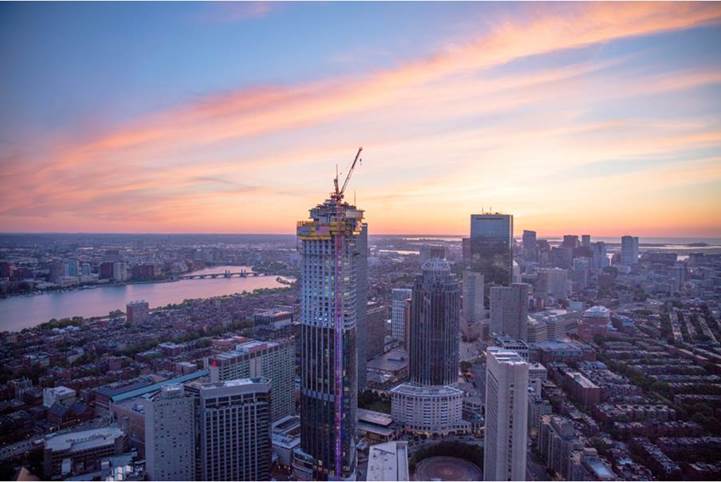 Cobb, working with local architecture firm Cambridge Seven Associates, has crafted a modern skyscraper inspired by both Boston’s storied history as well as its progressive future.

One Dalton, home to a collection of 160 private residences as well as a five-star Four Seasons hotel, offers unobstructed views of the city and its surroundings in every direction, from Boston Harbor to the Berkshire Mountains and Cape Cod shores.

The 160 private residences are perched on the 61-story tower’s uppermost floors, atop the 215-room Four Seasons hotel.

First residents and hotel guests to the Back Bay neighborhood are scheduled to be welcomed early 2019.

Residents will have access to the full services and amenities of hotel, such as laundry, housekeeping, turndown, and catering services.

One Dalton will also feature a bespoke collection of gallery-worthy art curated by the team of Bostonian art consultants at Kate Chertavian Fine Art, including a number of commissions created specifically for the development.

In addition to the private lobby and 50th Floor Club Lounge, residents of One Dalton have direct access to more than 20,000sf of amenity space managed by Four Seasons.

Additionally, residents will enjoy access to Zuma, the world-class contemporary Japanese restaurant opening in the building. .

One Dalton is nestled in the heart of Boston’s historic Back Bay neighborhood within walking distance of the area’s  boutiques, galleries, museums, cultural institutions, cafés, and restaurants including the Copley Mall, Prudential Center, Newbury Street, Museum of Fine Arts, Isabella Stuart Gardner Museum and Symphony Hall.

Boston’s multitude of green spaces, such as the Commonwealth Avenue Mall, the Back Bay Fens and the Charles River Esplanade are also close by.

One Dalton is conveniently located near the Back Bay Amtrak rail station, and is a few minutes to Logan International Airport,.