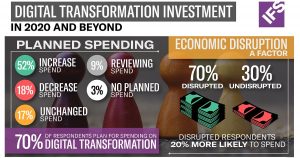 While many people might assume that respondents concerned with the economy would pull back on technology spending, the reality is that investment is increasing. The survey data indicates that, during these dynamic times, plans to increase spending on digital transformation track closely with concerns about economic conditions disrupting the business. In fact, the survey indicates that people concerned with economic disruption were 20% more likely to plan increased spending on digital transformation.

Appetite for digital transformation initiatives is, however, not consistent across all geographies or industry verticals. Looking closer at the latter, the survey places construction in the lead, with 75% of respondents in this sector saying they have plans to invest this year. Runners up in this regard are information technology (58%) and manufacturing (55%) companies. On the other end of the spectrum, the study finds more caution in industries in energy and utilities at 37%, trailed by retail at 35%.

Despite a widespread willingness to invest, the study reveals digital transformation execution as a fraught area for many decision-makers. The ability to deliver a measurable return on technology investment quickly, and to the satisfaction of internal stakeholders, is the number one concern for nearly two thirds of decision-makers (64%).