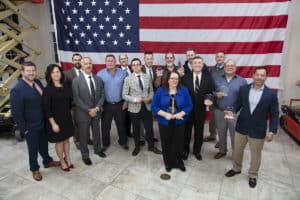 West Hartford, CT – S/L/A/M Construction Services was recently honored by the Associated Builders and Contractors (ABC) of Connecticut with an Excellence in Construction Award for the University of Hartford Gengras Student Union addition and renovations project, located in West Hartford.

The 3,000sf addition and 82,260sf renovation to the Gengras Student Union building featured integrated planning, programming, design, and construction management from the team at SLAM. The scope included expansion and improvements to gathering, common, and dining spaces, new offices, and meeting rooms.

With returned contingency, SLAM was able to include owner-deferred maintenance scope into the project. The occupied building addition and renovation was multiphased to minimize disruptions and maintain the functionality of the student union during construction.

SLAM CS accepted the award at the ABC Annual Meeting and Excellence in Construction Awards Dinner in Southington on October 25.

“I have worked on multiple projects and have grown to rely and trust the professional staff at SLAM,” says Nicholas Macy, CCM, PMP, director of planning and construction, University of Hartford. “The team successfully scoped, estimated, and designed the project within a limited budget, communicated effectively when issues arose on site and phased the construction in a way that accommodated the multiple occupancy uses.”