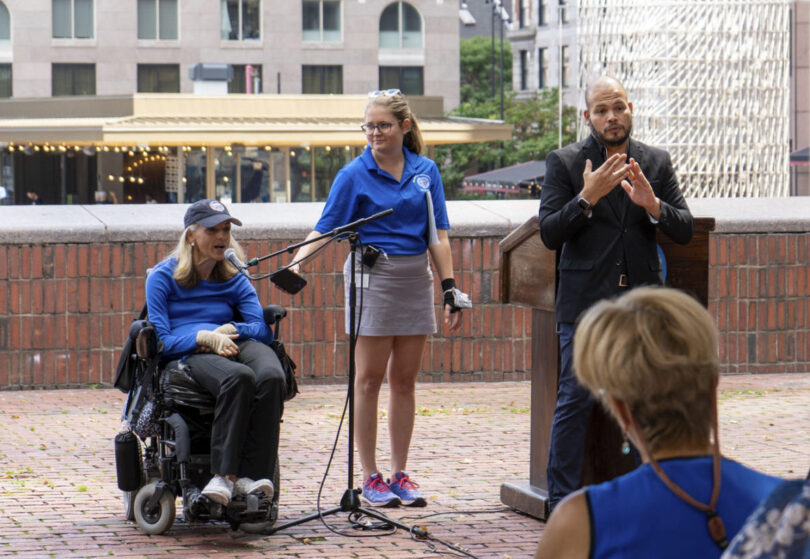 Boston – On Aug. 31, the City of Boston held its annual ADA Day celebration at Boston City Hall, where city officials and disability advocates remarked on the importance of the Americans with Disabilities Act (ADA), and highlighted the accessibility of Boston-based global design firm Sasaki’s City Hall Plaza renovations approaching completion nearby.

Since its opening in 1968, the plaza had been largely inaccessible to people with disabilities. Its original design required people to navigate a 26-foot descent from Cambridge Street to Congress Street across several sets of stairs, broke wheelchair bearings with its rough and widely-spaced bricks, and only had one accessible entrance to City Hall itself. When Kristen McCosh was appointed as disability commissioner of Boston in 2010, these barriers still persisted, 20 years after the passage of the ADA. McCosh said, at the beginning of her term as the city’s chief accessibility officer, “people with disabilities felt like they literally had no path into City Hall.” One of the first things McCosh and other advocates on the Disabilities Commission Advisory Board successfully pushed for was the installation of an asphalt ramp leading to the building’s entrance. 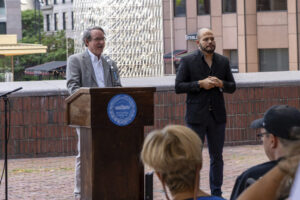 Sasaki principal, Fiske Crowell, spoke about the accessible components of the plaza’s design.

Sasaki’s renovation of Boston City Hall Plaza integrates accessibility into the foundation of the space, rather than creating a separate experience for people with disabilities. Every area will be universally accessible. The 26-foot slope of the site is no longer navigated by a series of steps but by a sweeping and gently sloping promenade designed to tie the whole plaza together, linking Cambridge Street to Congress Street with a new, fully-accessible route. For the first time, all primary entrances to City Hall are universally accessible as well, connected to gathering spaces by gradual inclines rather than circuitous ramps. And while maintaining the plaza’s original material palette, the new design uses bricks that are tightly jointed, stabilized by edge restraints, finely detailed, and deliberately patterned to prevent mobility aids from getting stuck in cracks, a notable problem with the unprotected bricks of the old plaza. 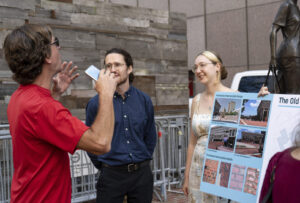 Sasaki designers chatted with ADA Day attendees about the accessibility improvements to the plaza.

Other new accessibility components include more than 10 companion seating arrangements in performance spaces across the plaza, a public indoor Civic Pavilion that overlooks Hanover Street, and a 12,000sf accessible playscape designed to provide equal opportunities for children with different abilities to reach the play elements. The playscape features transfer spaces for children to get out of a wheelchair and gain access to elevated elements, accessible operating wheels and buttons to operate play elements, and an accessible path through the entire play area. Sensory components, including interactive water runnels, interactive chimes, and play cubes with varied concrete textures etched with letters and numerals, also provide a range of experiences for children with sensory disabilities.

Sasaki’s designers say they hope the new City Hall Plaza, which opens this fall, serves as an inspiration for universal accessibility projects across the city.

“Boston has a lot of built-in challenges,” said McCosh. “We’re an old city and a historic city. We’re a winter city, we’re a vertical city, and we’re a densely packed city. All those things together don’t make a great roadmap for access. However, we do have political will. We have progressive leaders, we have intelligent and talented people from a lot of universities, and we have great firms like Sasaki to put on their thinking caps and come up with ways to create accessibility.”