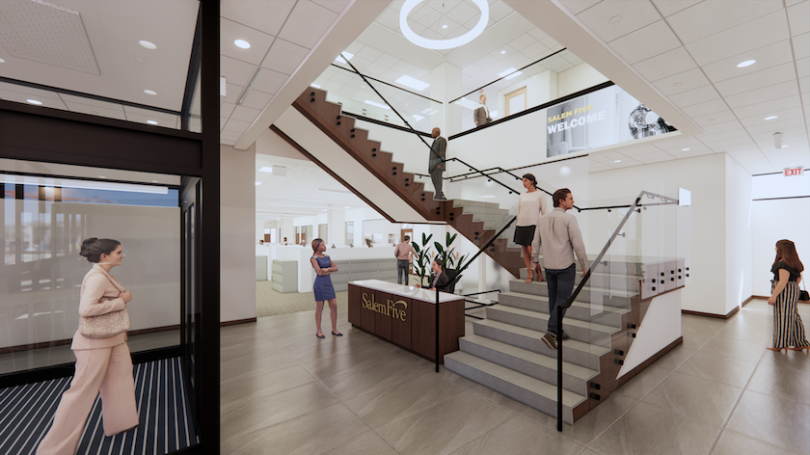 Founded in 1855 in Salem, Mass., the Salem Five bank has grown considerably since its early days when it was nicknamed the “Nickel Bank” (back when the first day’s deposits ranged from 5 cents and upward).

With offerings today that include retail branch banking as well as investment services, mortgages and insurance, Salem Five now serves the North Shore, Boston and beyond. To accommodate its growth and remain integrated in the fabric of the community, Salem Five purchased a 1970s-era, 5-story office building in 2003 at One Salem Green. Until 2019, the building was partially occupied by Salem Five, with tenants occupying professional offices sprinkled throughout the building. As the bank’s service offerings have grown, there was a need to take over the entire building. 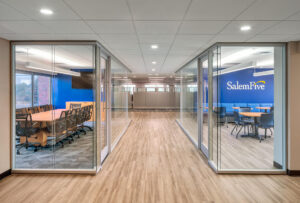 Conference spaces include a large conference center for virtual client meetings, which are expected to continue beyond the pandemic as a tool in maintaining key working relationships.

Jones Architecture began working with Salem Five in 2019 to design a series of interior renovation projects to better leverage the space it occupied within the building and expand into former tenant-occupied spaces. Salem Five’s goal was two-fold: accommodate growth and ongoing business needs through a phased floor-by-floor renovation program, and take the opportunity to update, refresh, and brand the spaces.

“An organization doesn’t survive 167 years and a century-plus in the same building without evolving,” notes Salem Five’s vice president of facilities, John Kucinski. “With these projects and others, my vision and the role of the entire facilities team is to support the bank’s operations, employees, and customers for a few more tomorrows, just as our predecessors have done.”

Each floor comprises 10,000sf in a rectangular configuration. The original design, which served as a state office building, utilized a double-loaded corridor with offices on the perimeter; similar to a hotel layout, the perimeter rooms/offices received daylight but blocked it from flooding into the rest of the building. Extensive use of dark mahogany doors and piecemeal updates also contributed to an oppressive and dated feel. Fortunately, the building comes with the proverbial “good bones;” in this case, long, narrow proportions with well-spaced columns that make transforming the space more possible.

Transparency and light have come to define the first two phases of the project and signal what’s in store for the rest of the building. In spaces that house the bank’s call center and the marketing department, the new plan inverts the prior layout, giving everyone on the floor access to light and views, while expressing the bank’s values of community and openness. Kucinski appreciates that the projects are “impressive without being ostentatious,” while delivering the desired functionality.

Next in the queue for One Salem Green are first floor renovations that will house commercial lending and wealth management divisions. As with the third and fourth floor, an open floor plan and large, streetside windows will flood the space with daylight and give passersby a view into the bank’s daily operations. A single, large entry with a reception area replaces multiple retail storefronts and will welcome the public into the building. A new conference center will anchor the bank’s virtual and in-person meeting functions.

As Salem Five builds toward its 200-year commitment to serving Salem and the North Shore, the bank’s future is looking brighter than ever. “Jones Architecture has been the bank’s perfect partner by coupling fresh, state-of-the-art design ideas with a sincere appreciation of the bank’s traditions and culture,” said Kucinski. 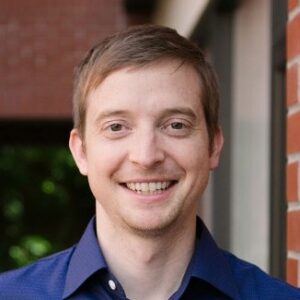