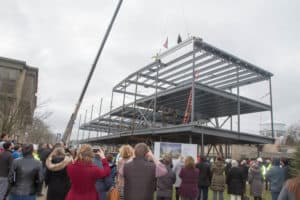 A steel beam, bearing an evergreen tree and an American flag, is hoisted into place atop the three-story steel structure that will become the SECCM Labs. / photo courtesy of Roger Williams University

On Dec. 17, 2018, a steel beam, bearing an evergreen tree and signed by trustees, administrators, alumni, donors, faculty, and students, was hoisted into place atop the three-story steel structure. The $13.8-million SECCM Labs will be named for former RWU Board of Trustees Chairman Richard L. Bready.

The 27,325sf building will become a hub of laboratories, fabrication spaces, and project rooms where students can apply theory to practice using state-of-the-art equipment. It is scheduled for completion in November 2019.

“This is an exceptionally exciting day,” RWU Interim President Andy Workman said. “This is a real milestone.” 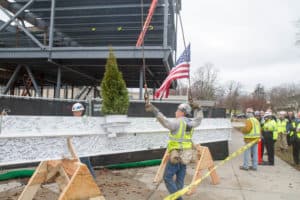 The SECCM Labs building is meaningful for two main reasons, Workman said. “One, this is a building that is dedicated to training the engineers and construction management people who will be on the cutting edge of erecting the buildings of the future. It’s a testament to the quality of our programs here. It’s a testament to the support of our alumni and to the support of employers who hire our alumni.”

Workman emphasized that a topping-off ceremony is meant to thank those who do the work of putting up the building. 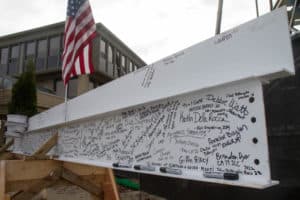 “The Scandinavian Teutonic tribes would put an evergreen tree on the top of a new structure when the skeleton of that structure was completed to honor the Norse gods but also to honor the people who had built the structure,” he said. “In ancient times, they may have been the people from the tribe. In modern times, it’s the construction workers and the steelworkers who built this building. Today, we are honoring them.”

“Although there are many milestones along the design and construction of a project like this, the topping-off ceremony is one of particular significance,” Shawmut Design & Construction Vice President Ron Simoneau said. “What it symbolizes is that the superstructure is substantially complete and now the dozens of tradesmen who will be involved in putting the façade together, the building envelope, the mechanical and electrical systems, the finishes, and, ultimately, the furnishings, will start to do their work.”

This article originally appeared on the Roger Williams University website, and was written by Edward Fitzpatrick