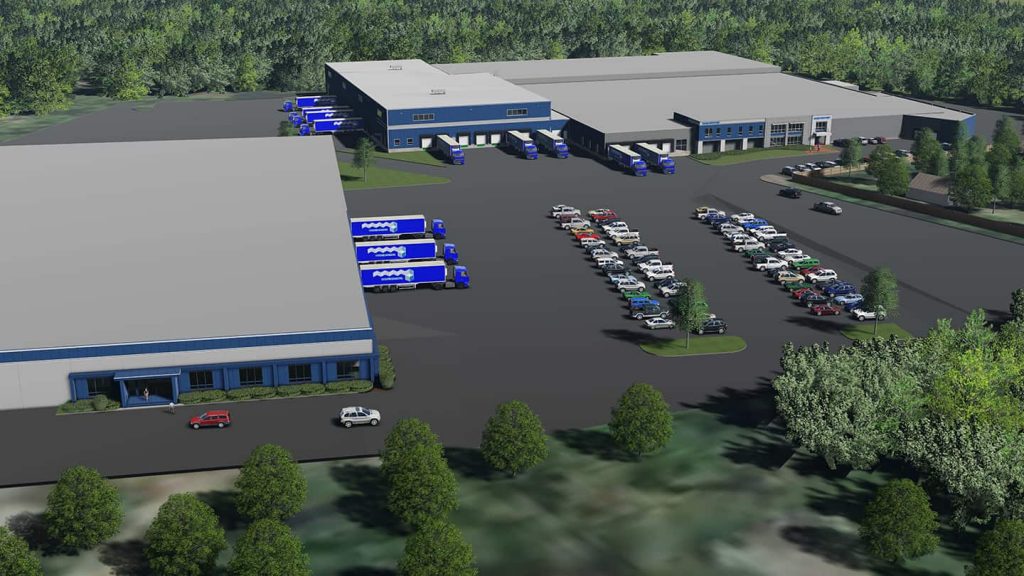 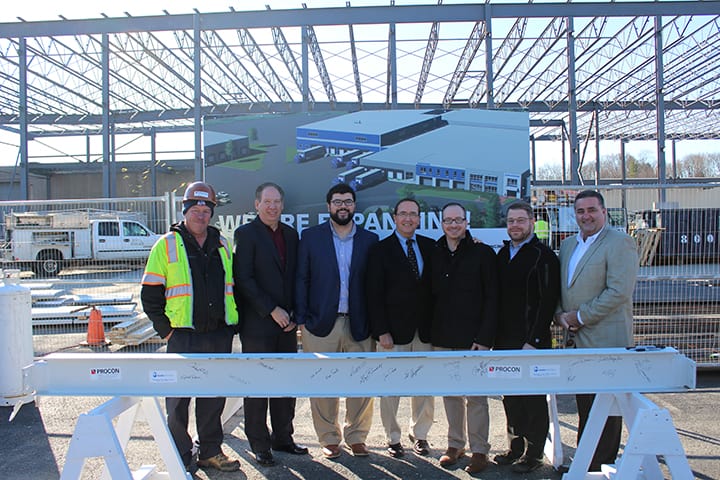 Worcester, MA – Rand-Whitney was joined by city of Worcester dignitaries, partners, and its employees, who gathered at the company’s Worcester headquarters at One Agrand Street for a beam-signing ceremony. Among the attendees were Worcester City Manager Edward M. Augustus and City Councilor George Russell.

PROCON of Manchester, N.H., is the designer and builder of the 45,000sf addition, and the company’s vice chairman John Samenfeld was on hand for the occasion.

Attendees signed their names on the 168-pound beam, and Rand-Whitney president Nick Smith opened up the event and talked about what the building upgrades will mean for their company’s headquarters. “We want the end result to be a first-class campus for our flagship facility and also be one of the most efficiently run plants in New England.”

The expansion comes at an opportune time as national demand for warehouses fueled by consumer online shopping soars.

The expanded area will be used for much needed additional storage space as well as for a state-of-the-art waste extraction system and 22 dock doors. The site refurbishments will also include a shipping/receiving area, increased trailer storage, a driver’s office area, and modifications to the existing parking area. When complete, the existing building and expansion will total 201,400sf.

Steel erection is about three-quarters of the way through, and the project is expected to be finished in spring 2018.

City Councilor George Russell took a few moments to talk about the project’s impact on the city of Worcester. He said, “Nothing is better than seeing people getting jobs and working in this city.” Rand-Whitney was great in their communication with us. They took the time to explain a good plan to the city that would have a minimal impact on the neighborhood. And, I hope that we will continue to see more of this.”

Well-known retailers are ramping up their online presence resulting in the exponential growth of shipping, which in turn equals increased packaging demand. With nationally-known retailers like Staples, Frito-Lay and Ken’s Steakhouse Dressing as clients (to name a few), the Worcester location is strategically poised to meet that rising market demand.

Rand-Whitney is one of several companies owned by New England Patriots’ Owner Robert Kraft. As such, it is the largest independent corrugated packaging manufacturer in New England with areas of expertise in cost-saving package re-engineering and custom lean manufacturing programs. The Worcester headquarters is their third warehouse collaboration with PROCON, who previously partnered with them on facilities in Dover, NH, and Pawtucket, RI.

Rand-Whitney Container has enjoyed a long-term, positive relationship with the City of Worcester and the local community. The company is excited about their growth and looks forward to playing an even larger role in contributing to the city’s success. This was echoed by Edward Augustus, who stated, “The renaissance of this company is a testament to the district and to all those across the city of what can be done when working with great partners.”

PROCON’s Vice Chairman John Samenfeld has worked on every PROCON project with Rand-Whitney, and as the morning’s final speaker, he thanked the PROCON team for their work in bringing the project so smoothly to this point. “The beam signing and raising is a significant progress milestone for this project and it has been a great team effort. And, we at PROCON are pleased to be partnering again with the Rand-Whitney team on another outstanding building.”