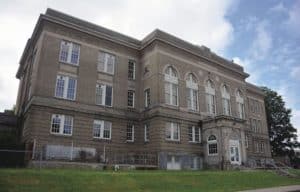 Farmington, CT – The transition of Bristol’s historic Memorial Boulevard School into an arts magnet school took a major step forward as the committee in charge selected Quisenberry Arcari Malik, LLC (QA+M Architecture) as the architect and lead designer for the project.

Preliminary QA+M rendering of the theater

Originally constructed in 1921, the landmark 96,000sf building in the heart of downtown Bristol was known as Bristol High School until the school system closed it in 2012.

The engagement of QA+M Architecture is the next step in reviving this vacant four-story facility into a performing arts magnet school for local students in grades six through 12. The project will also preserve the building’s 900-seat theater — the city of Bristol’s largest performance space.

Officials have discussed the potential for using the theater for concerts, plays, and other public performances when school is not in session. The anticipated project budget is $54 million.

The building is listed on the Connecticut Register of Historic Places as a historic structure.