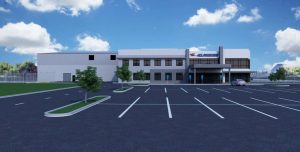 Bedford, MA – Jet Aviation and PROCON were joined by leading corporate and local officials recently at a groundbreaking for a facility improvement project at Jet Aviation’s Boston/Bedford location.

PROCON of Manchester, N.H., is the construction manager for the project, and SAA Architects and Design of Iselin, N.J., is the design architect.

The new facility upgrade is a two-phase 12-month project designed to improve operational safety and efficiency and achieve LEED Silver certification. The project will be composed of 40,000sf of hangar space capable of handling larger private/corporate aircraft up to the size of a Gulfstream G650 and a Global 6000. The plan also includes a 16,000sf office and shop space, and a two-story 13,000sf state-of-the-art FBO (fixed-base operator), to accommodate the needs of Jet Aviation customers.

Additional improvements include a 92,000sf ramp and apron upgrade, new roads and parking, underground utilities, and new pavement and landscaping. The facilities, which are located 20 miles outside Boston, will offer direct access to Hanscom Drive and is expected to be completed in late summer 2016.

“We are delighted to be under way with the construction and enhancements to our Boston/Bedford facility,” said John Langevin, vice president, FBO Operations, North America. “Jet Aviation has worked diligently to bring this project forward, and we are excited to be taking the next step, and to be partnered with PROCON on the construction of our facility. We are confident that by working with PROCON and our other construction partners, we will have a best-in-class facility at Hanscom Field.”

PROCON’s president, John Samenfeld, also commented, “We are very pleased and excited to partner with Jet Aviation in the construction of its new facility.”

Massport officials were in attendance at the event, including Hanscom Field Director, Sharon Williams, who stated, “Business Aviation is very important to the economic strength and growth of Massachusetts, and this Jet Aviation project is important for the Hanscom Air Field.”

Hanscom Field is the largest general aviation facility in New England with significant storage facilities for private and corporate aircrafts. In recent years, the demand for hangar space has soared as private air traffic has increased resulting in waiting lists for storage space. The new Jet Aviation hangar will be meeting that increased demand.