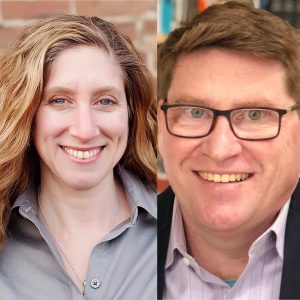 In episode 17 of the Build Better podcast, Anastasia welcomed Mark Reed and Stephanie Goldberg, founding principals of the Boston-based architecture and design firm, Lab / Life. Science. Architecture, Inc. (LAB/LSA). They talked about the threat climate change poses to Boston, Cambridge, and surrounding neighborhoods, and their proposal for a permanent solution to rising sea levels, titled The Blue Necklace.

Current climate science indicates that, within the next 50 to 100 years, rising sea levels of only nine inches will start to regularly inundate the heavily developed and heavily populated areas of Boston’s Back Bay, Downtown Waterfront, and the Seaport District. Predictions are that the city streets will be permanently flooded and buildings will have to be abandoned if a solution is not implemented.

Reed and Goldberg explain that the two most comprehensive plans, Cambridge’s Climate Change Preparedness & Resilience Plan and Climate Ready Boston, lack the prevention aspect and focus primarily on the temporary approaches to flooding, including measures such as creating flood-able infrastructure and retreating and rebuilding, to address the issue.

LAB/LSA’s collaborative design exploration, The Blue Necklace, was developed to address the more permanent sea level rise that experts say could happen within 50 to 75 years. The goal is to prevent catastrophic loss of land in Boston and Cambridge and surrounding areas by building out, rather than retreating.

The Blue Necklace’s guiding principles are “to prevent the inundation of existing neighborhoods, retain current waterfront property, create new opportunities for recreational engagement with the water, maintain critical sea access for the Coast Guard and shipping ports, and fund the project in a socially equitable way through a progressive tax on the development of the new made land.” LAB/LSA plans to engage the design studios in Boston to get an interdisciplinary look at all of the landscapes – engineering, landscape design, urban design, and real estate – and explore the solutions that will protect the city in the long term.

Reed and Goldberg encourage developers to start now in thinking about and planning for the future of Boston. This includes thinking “big picture” and looking at it as a community-wide and city-wide issue. Goldberg says, “Starting now to plan is really critical. There is so much involved, from economics and politics, to technology and zoning. There is so much that has to work together to make something like this work.”

Both Goldberg and Reed agree that the city of Boston has done a great job creating an awareness of this issue, but what is lacking is real, effective solutions. Reed says, “We need to get a big picture in place that everybody rallies around. We have decades after that to work out the nuances of how the technique will work and how the urban design will work, and how it integrates into the city better, but let’s get a plan that’s “big picture” that everybody agrees to.”

When considering a development, they encourage industry professionals to “think beyond the project” and consider how it will impact the region. By beginning to plan now, they add, creative solutions can be critiqued and implemented that will keep the city of Boston dry in the long term.

To find out more about the Blue Necklace, visit newbostonharbor.com.