From state capitol discussions to DOT budget sessions, from town meetings to angry drivers on the road, anticipation builds on how the U.S. will address the high cost to fix long-neglected infrastructure.

Measuring the need for improvements

Few would dispute the need for improvements. One way to gauge the deficiencies is to look at the financial returns to gross domestic product from built assets. The 2016 Global Built Asset Performance Index, released by Arcadis, ranks how tangible buildings and infrastructure contribute to each country’s GDP across 36 of the world’s largest economies.

According to the Arcadis Report , the U.S. continues to trail China in generating the highest financial returns to its economy and GDP from built assets. Comparing the two countries, we observe that China’s infrastructure contributes $10.4 trillion from its built assets while the U.S. ranks second at $5.4 trillion. China’s economy gains enormous strength from its built assets — accounting for 54% of GDP financial performance in the year studied — compared to 30% of GDP returns for the United States.

How much is enough?

The obvious solution to increasing built asset performance is to fund more infrastructure. A new $1 trillion infrastructure investment proposal by the Trump administration could have a lasting impact on U.S. built asset returns and on the U.S. economy as a whole. But is $1 trillion enough?

The U.S currently spends between $300 billion to $400 billion per year on infrastructure. Most of the spending is by the states. The federal contribution is a pittance in comparison. If the federal government invested $1 trillion over the next 10 years, it would result in an increase of 3% additional growth in built asset performance over that 10-year period. Without that infusion, the U.S. is forecasted to grow by only 1% of GDP returns. But that still pales in comparison to what China is spending and hinders our ability to remain competitive in a global market.

We need to make changes to fund improvements

The “trillion dollar question” is how to fund improvements. The incoming administration has suggested more private funding sources or public/private partnerships (PPPs). While private investment when mixed with public funding can be a sustainable solution for getting highway and airport improvements built, there are hurdles to overcome:

Essentially, $1 trillion is not enough. But it’s a step in the right direction. It’s time to demonstrate the true power of infrastructure as the growth opportunity it is, and to consider better ways to deliver more economic performance from our built assets, while improving mobility for our communities for a stronger, more resilient future.

The Construction Institute thanks Tom Morgan, vice president, business advisory leader for Arcadis, based out of New York, specializing in asset management and data analytics solutions, for authoring this article. The Construction Institute of the University of Hartford (construction.org), is a nonprofit, nonpartisan association of diverse professionals whose mission is to improve the AEC industry by promoting cross-industry collaboration. The institute is privileged to count Arcadis among its members. 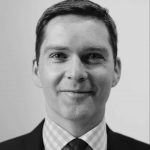 Tom Morgan is business advisory leader at Arcadis and an active member with The Construction Institute.