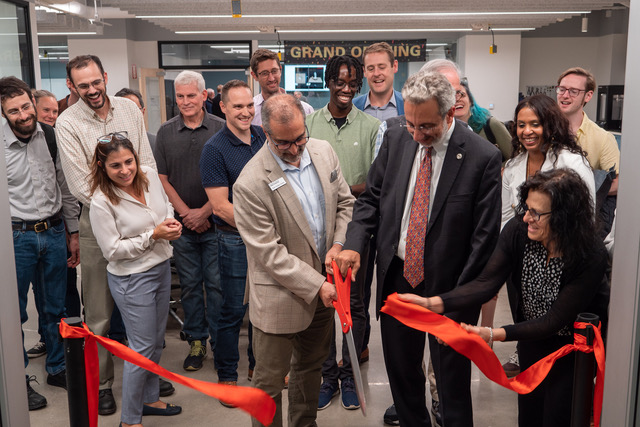 The transformed space includes state-of-the-art fabrication equipment and vibrant environmental graphics in a flexible academic setting. According to project stakeholders, including the design team and university leaders, the CEE Innovation Studio is expected to boost recruitment prospects for a department with ambitions to contribute to evolving paradigms of urban design and infrastructure. 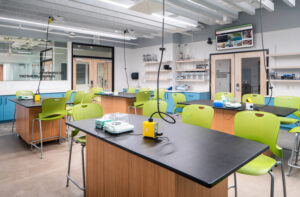 “By introducing transparency with a glass wall along the corridor we hoped to make the Innovation Studio a more visible and engaging part of academic life on campus. The majority of our effort as designers went into planning space utilization, to make the best use of the available footprint,” said Maggie Mitchell IIDA, associate and senior interior designer with Dyer Brown.

Prior to the renovation, the 5,000sf studio featured a large multipurpose space with room dividers, an environmental lab, one classroom, and a fabrication facility. Dyer Brown led a team to demolish much of the interior architecture and realign the programming, now anchored by the CEE Build Space – a reconfigurable setting geared for developing and building innovative civil and environmental engineering materials, components and systems, visible through the new glass entrance. 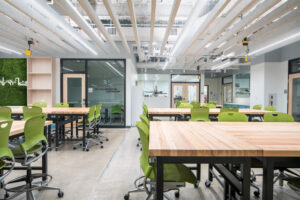 According to Mitchell, the environmental lab is in the same location as before, the layout unchanged to leave fume hoods, gas lines and other lab elements unmoved. The infrastructure lab also remains in the same corner location to avoid having to relocate the shaker table secured to the foundation (used to test objects for seismic engineering) but has been completely enclosed for acoustical separation from the rest of the studio. Dyer Brown’s design solution replaces a metal roll-up door with new windows for bringing in natural daylight and connecting visually with the campus.