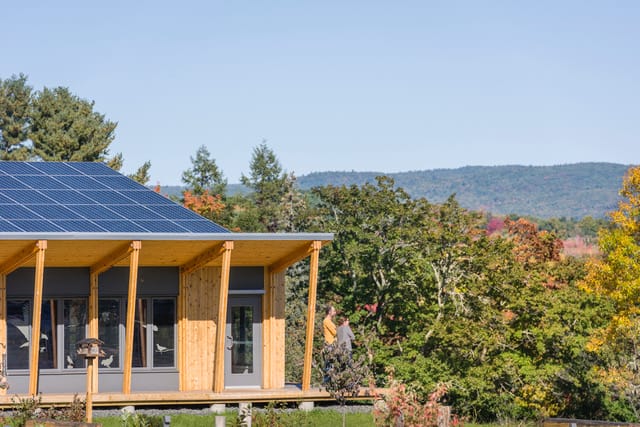 The network of hiking trails were greatly expanded

Amherst, MA – The new 8,000sf home of the Hitchcock Center for the Environment doesn’t just talk the talk. A participant in the Living Building Challenge, the $4.2 million center generates its own energy from the sun and captures its own drinking water from the rain.

Located on Hampshire College’s campus in Amherst, it also features an integrated interpretive program that explains universal natural principles and illustrates how those principles are applied within the building.

Designed by Boston’s designLAB architects, the new center uses a combination of high-tech and hands-on tools to illustrate the direct connection between people and our place in the natural world.

designLAB installed sensors that monitor outdoor temperature and humidity. When it’s nice outside, the mechanical system is disabled and an indicator light switches from red to green, letting users know it’s time to open the windows.

The Hitchcock Center is dedicated to the promotion of environmental literacy — that is, a broad understanding of how people and societies relate to each other and to natural systems. Every classroom is equipped with direct outdoor access, and Hitchcock embeds learning opportunities within every space, including hallways and transition zones. 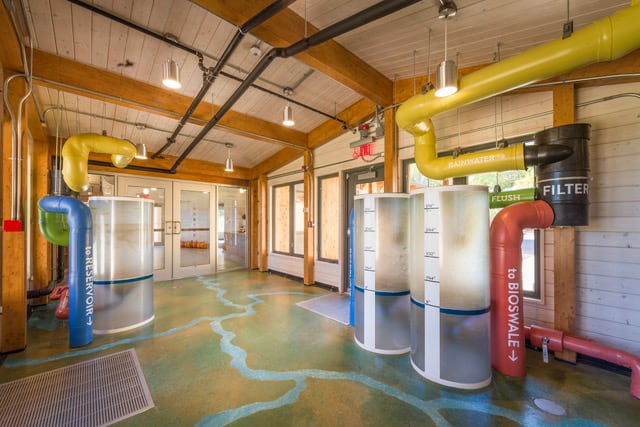 Outside the center is an environmentally diverse landscape, including a rain garden, constructed wetland, and pollinator gardens, to promote habitat and species diversity. Locating the building on Hampshire College offers access to an extensive trail network and broadens the center’s educational network.

The site’s location also offers access to and opportunities for observation of the natural world, including bird watching, specimen gathering, water sampling, and stargazing.

The building’s two wings are connected by an ecotone — an ecological zone of transition from one habitat to another (for example a wetland to woodland or forest to prairie). The ecotone offers the chance to transition from The Den to The Nest or from observed principles of nature to applied principles. On the floor of the ecotone is an artist’s rendering of the Connecticut River Valley watershed, which illustrates HCE’s role in the regional water system.

The building captures all of its drinking water from rain and returns all water used back to the aquifer. During a storm, four large, clear cylindrical tanks located in the ecotone capture the first 1/16-inch of rain from the roof. This initial runoff contains the largest amount of impurities. Subsequent runoff flows into a reservoir beneath the nest courtyard. Inside the ecotone, pipes are color-coded to show the path and function of the water collection system. In the basement, a series of UV treatments and filters purifies the water for drinking without chemicals.

Composting toilets use 3 to 6 ounces of water with biodegradable foam and greatly reduce the center’s overall demand for wastewater handling. The composting toilets are paired with a greywater system to handle wastewater generated from other plumbing fixtures. A constructed wetland outside the building treats wastewater by mimicking the biological, chemical, and physical processes that occur in natural wetlands. The treated water is then released onto a leach field where it recharges underground water reserves.

“The Hitchcock Center wanted a smart building, but they also wanted the building’s staff to be responsible for helping to achieve sustainability goals,” said Sam Batchelor, a partner at designLAB architects.

Built on a former apple orchard, the project both mitigated and embraced the site’s previous use. Arsenic present in the soil from pesticides was managed on site, while protecting children from exposure to any impacted soils. Artifacts from the original site were harvested during construction and reused as building features, including: benches made from felled trees; a “basking boulder” installed inside to illustrate warming techniques of cold-blooded animals; a root ball hung from the ceiling to highlight complex subsurface systems; and a unique H-shaped tree used to mark the trailhead at the edge of the property.

The building’s two wings are connected by an ecotone – an ecological zone of transition from one habitat to another (for example a wetland to woodland or forest to prairie). The ecotone offers the chance to transition from The Den to The Nest or from observed principles of nature to applied principles. On the floor of the ecotone there is an artist’s rendering of the Connecticut River Valley watershed, which illustrates HCE’s role in the regional water system.