Bedford, MA – Jet Aviation of America was joined recently by partners, local dignitaries, and business officials in a grand opening celebration for a new 40,000sf hangar and fixed-base operation (FBO) at its Boston/Bedford location.

The ultra-modern hangar and FBO were designed by SAA Architects and Design of Iselin, N.J.. Manchester. N.H.-based design-build firm PROCON was the construction manager on the project. 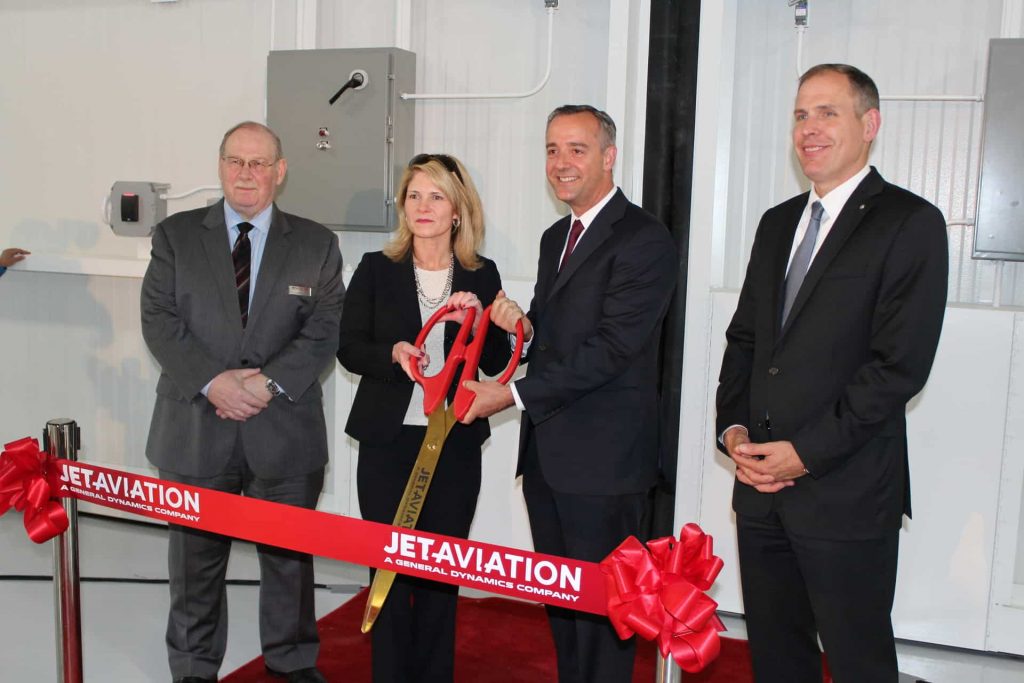 The new facility is composed of the hangar space capable of handling larger private/corporate aircraft up to the size of a Gulfstream G650 and a Global 6000. The structure also includes a 16,000sf office and shop space, and a two-story, 13,000sf contemporary FBO, to serve the needs of passengers/crews. Travelers and crew members alike will enjoy an FBO waiting area equipped with flat-screen TVs and Wi-Fi, access to an executive conference room, and a crew lounge. A refreshment center and snack area for breakfast and lunch options will also be available.

From the start, sustainability was an important issue, and sustainable elements were incorporated into the LEED Silver design. The structure was built in compliance with USGBC requirements, which includes high-efficiency HVAC systems; low-flow plumbing; low-VOC paints, sealants, and adhesives; LED lighting; and more. The results are an energy-efficient structure with a minimal carbon footprint.

The evening’s program was opened by Jet Aviation President Robert E. Smith, who welcomed the attendees and commended the community partnerships and project team whose efforts made the facility possible.

He stated, “As we celebrate our new FBO and hangar facility 23 years after we began operations at Hanscom Airport, we hope you will see Jet Aviation’s growing dedication, not only to this region, but also to delivering premium services to our customers in business aviation around the world.”

Business partners and attendees expressed their excitement about the potential of the area’s latest private aircraft facility. Among them were representatives from Essex Aviation Group – an aviation consultation firm based in Portsmouth, N.H. Company executives Lee Rohde and Tom Mitchell were quick to point out the positive benefits saying, “The value of the new hangar and FBO facility we feel is tremendous.  Private aircraft are in many instances physically larger than in past years and the ability for our clients to experience efficient FBO operations and to have access to hangar protection for their aircraft, particularly here in the Northeast, is paramount.”

The Vice President of FBO Operations North America for Jet Aviation John Langevin, explained it in marked terms, “This facility has become a real game changer for this airport. It’s a 40,000 SF free span facility, and with the larger cabin-class aircraft entering the market, we feel that this is a game changer for us. Also, the hangar is 90% sold already just because of what our team has built here.”

The hangar’s construction journey included a milestone marking the half-way point of the project. On September 12, 2016, workers, officials and project leadership were awed as the mammoth-sized 285,000-pound steel truss (to span the back of the hangar) was hoisted into position. It took two weeks for Massport in partnership with the contractors, erectors, designers, and engineers, to develop the logistics to support the tandem crane lift-assisted venture. The procedure was hazardous, but the spectacular sight of 300 feet long by 20 feet tall truss swinging into position was a momentous achievement felt by all.

Phase I of the two-phased project commenced in late 2015 with the installation of an access road and two parking lots. Phase II consisted of the 40,000sf hangar space and 13,000sf FBO to accommodate the needs of Jet Aviation customers. Additional improvements included the 92,000 SF ramp and apron upgrade, and the exterior was finished with new pavement and landscaping.

Hanscom Field is the largest general aviation facility in New England, and hangar space demand has soared in recent years as private air traffic has increased resulting in waiting lists for storage space. Jet Aviation’s new facility is ready to meet that demand by providing a best-in-class facility for its returning clients and ready to welcome new clients from the Greater Boston area.

Lee Rohde voiced the sentiments of many of the attendees when he said, “Its size and architectural design has clearly made it the centerpiece among other hangars surrounding it and truly is a magnificent structure.  In the coming years, we fully expect to provide Jet Aviation many opportunities to extend their aviation services to our clients.”