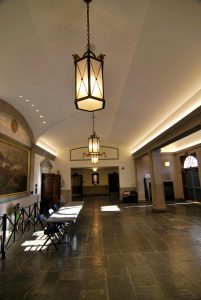 Lexington, MA – Nauset Construction served as the general contractor for the recently completed $8 million renovation to the historic Isaac Harris Cary Memorial Building, located at 1605 Massachusetts Avenue in downtown Lexington Center. The project was designed by Cambridge-based Mills Whitaker Architects, that specializes in historic preservation. Originally constructed in 1928, the centerpiece of the work was the restoration of the building’s 820-seat Battin Hall to its original prominence as a world-class musical and theater performance venue and lecture hall. Additional improvements to the 40,000sf Colonial Revival building included the installation of a new HVAC mechanical system, extensive historic restoration work, and a wide range of structural enhancements that ensure accessibility for all patrons and performers.

One of the key design challenges addressed by Mills Whitaker was to improve the critical sound quality of the performance space. The solution was the installation of retractable banners that change the acoustical characteristics of the room to suit the range of performances and a new sound system featuring state-of-the-art amplification and speakers to ensure an optimal listening environment for the broad spectrum of events. 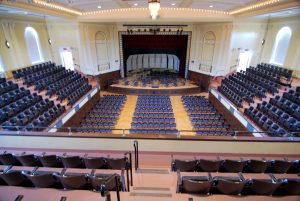 Prior to the renovation project, it was necessary to shut down the building’s HVAC system during musical performances and meetings due to unacceptable noise levels. To rectify this problem, Mills Whitaker designed a new system, including the replacement of existing ductwork. Battin Hall’s performance space also underwent significant upgrades, including construction of a permanent thrust stage (which extends the stage well past the proscenium arch into the audience area), and the addition of two wheelchair lifts.

“Our task was to improve the space while making it look like we were never there, and also to make the performance hall work as well for lectures as it does for the Symphony,” said Don Mills, principal at Mills Whitaker Architects, which worked closely with both the Historic Districts Commission and the Commission on Disability on the renovation plans.

. Battin Hall has been home to the Lexington Symphony for over a decade, and this year will host an eclectic slate of performers as well as the Cary Hall Lecture Series and Town meetings.

“Nauset Construction has developed a growing portfolio of complex historic restoration projects, and being part of the team that preserved this first class performance hall has been extremely gratifying,” said Anthony Papantonis, President of Nauset Construction Corporation.

To ensure that the new performance space will be accessible to all, Mills Whitaker’s design incorporated new hand rails, ramps and wheelchair seats that were constructed inside the building as well as a new ramp to the exterior of the building. Among the many historic preservation activities was the restoration of all original lighting fixtures, removal of carpet to expose the slate stairs and extensive repairs of the exquisite terrazzo flooring.