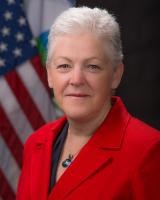 Greenfield, MA – The Northeast Sustainable Energy Association (NESEA) recently announced that United States Environmental Protection Agency Administrator Gina McCarthy will deliver opening remarks at the upcoming BuildingEnergy 14 conference. Administrator McCarthy will take the stage at the BuildingEnergy 14 opening plenary at 9:30 AM on Wednesday, March 5th to speak on the EPA’s upcoming policies and how they may affect the building industry over the next several years.

NESEA Executive Director Jennifer Marrapese commented that “Administrator McCarthy has played, and continues to play, a critical role in helping to ensure that we are prepared to face climate change and its attendant consequences in the Northeast. We are delighted to welcome her back to Boston to speak at BuildingEnergy this year.”

A Bostonian when her duties do not require her to be in D.C., Ms McCarthy has a long history of guiding and shaping environmental policy in New England. Prior to her 2009 appointment as Assistant Administrator of the EPA by President Obama, Ms McCarthy served as an environmental advisor to no fewer than five Massachusetts governors. She then served as the Connecticut Department of Environmental Protection’s Commissioner from 2004 to 2009. McCarthy was nominated to the role of US EPA Administrator following the resignation of Administrator Lisa Jackson, and assumed the office in July 2013.

Recently, President Obama said that he will use executive authority to advance his agenda on climate change. Ms McCarthy, as head of the EPA, will play a large part in implementing this agenda. During her tenure, she has repeatedly emphasized the need for climate resilience and environmental decisions that make sound economic sense, and has challenged government agencies and private citizens to take action. Ms McCarthy has recently said, “The costs of ignoring the weather and health risks associated with climate change are too great, not to mention the potential savings that can be achieved by reducing carbon emissions.”

For nearly 40 years, NESEA and its members have been working towards creating a resilient, low carbon future by educating a multidisciplinary group of practitioners on best practices in efficiency and sustainability. This year’sBuildingEnergy conference will offer educational sessions on resilient cities, energy policy, energy distribution, and using environmentally responsible materials in buildings. Among a host of other experiences, NESEA will award its annual $10,000 Zero Net Energy Award to a building project that demonstrates one year of zero net energy use or net-positive energy production.

“I’m thrilled that NESEA will have Administrator McCarthy speaking to the professionals at BuildingEnergy who themselves are leaders in the fields of high performance building and sustainability in the built environment,” said BuildingEnergy Conference Chair Marc Sternick, LEED BD&C. “I invite everyone with a stake in the New England energy market and building industry to join us for her remarks, and for great discussions on how we can reduce carbon emissions and embodied carbon through efficient buildings.”