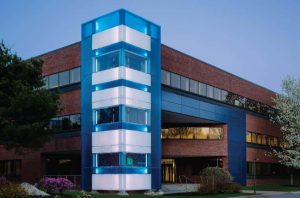 Burlington, MA – Maugel Architects has completed the repositioning of five buildings at The District, formerly known as New England Executive Park in Burlington.

The owners rebranded the park as part of a multiphase redevelopment project to revamp the 13-building complex into a walkable, urban style destination. Maugel Architects designed dramatic façade improvements and common area upgrades to five buildings within the complex. The renovations transformed the office park into a vibrant, pedestrian-friendly campus with modern eateries.

At Building 24, a dramatically cantilevered canopy was combined with a new two-story steel and glass vestibule, giving new prominence to the previously nondescript entry façade.

The design challenge at buildings 15, 16, and 17 was to unify the façades without penetrating the building envelope or replacing existing doors and windows. The solution was the use of bright, polycarbonate panels on new structural grids — independent of the existing buildings. The backlit towers create an iconic architectural feature that contributes to the branding of the campus. 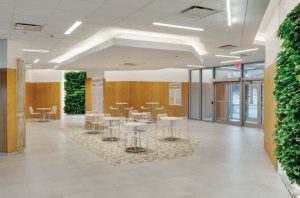 The original entrance to Building 8 was encumbered by a windblown, poorly lit plaza. The newly enclosed lobby transformed the space into a tenant amenity.

“It had been our privilege to work with the team at National Development. We wanted the people employed at The District to have an experience that was second to none, with an active vibe fueled by exciting new amenities, restaurants and services,” said Brent Maugel, president of Maugel Architects. “We are very excited about the results of the transformation, and look forward to continuing our relationship with the National Development team.” 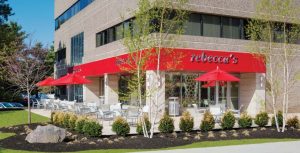