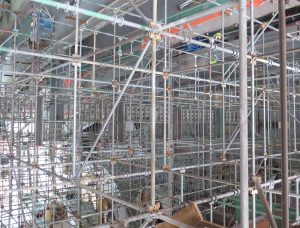 During the scaffold installation, Marr had to work carefully around finished materials, including this spiral staircase.

In October 2015, Marr Scaffolding Company began work for general contractor Suffolk Construction at Northeastern University’s Interdisciplinary Science & Engineering Complex (ISEC). Marr is responsible for installing the interior scaffolding at this state-of-the-art 220,000sf complex on Columbus Avenue, which is scheduled to open in 2016.

Employing a small core crew, Marr is installing systems scaffolding in three spaces: the Atrium, Auditorium and Information Meeting Space Room. The scaffolding (reaching 90 feet) has been installed in the Atrium, which is logistically more challenging than the rest of the building. According to Suffolk’s Assistant Project Manager Adam Benjamin, “Some of the areas where Marr is installing scaffolding are going to have finished materials in them, so working safely, carefully and quickly is immensely important here … and Marr has been doing a great job staying flexible.” 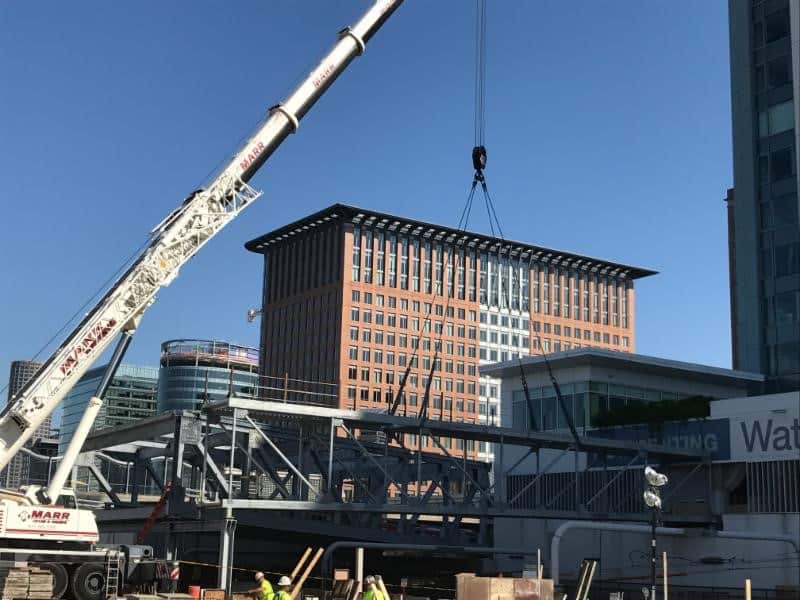 Marr installed systems scaffolding as high as 90 feet in the Atrium.

Though the crew is small in size, it is large in expertise and they have been able to accommodate the phasing of the building’s construction – having to mobilize, demobilize and work with and around other trades, as well as navigate around structures including a spiral staircase and the building of a masonry wall. While maintaining a constant flow and working within a short time span have been key priorities, the crew has managed to perform the quick installation employing the best safety practices. Suffolk Superintendent Kevin Sullivan noted that despite the difficult nature of the project, it has been a seamless operation with no issues thus far.

In addition to the interior scaffold, Marr installed a temporary enclosure comprised of scaffolding, beams and plywood over three large skylights in the Atrium. The crew also tarped a portion of the complex for winter protection with the assistance of cranes from Marr Crane & Rigging. Also on site are aerial lifts from Marr’s Aerial Lifts Division. The scaffolding is expected to remain on site for a minimum of eight months.