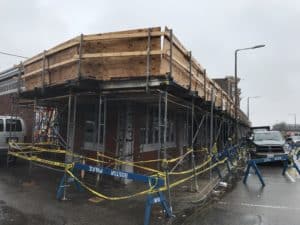 Boston – Isaac Blair, of Marr’s specialty shoring company, was called on recently to provide emergency repairs to a storefront parapet that had partially collapsed, injuring two pedestrians on Harvard Ave. in Allston.

Blair responded immediately by having an excavator remove all the debris from the street as well as some masonry that was balanced precariously on the edge of the building.

The brow was uniquely constructed with a capacity of 150 pounds per sf, which can sufficiently handle the load in case of further deterioration and collapse.

Construction of the brow was completed within a week after the incident and is expected to remain in place until next spring after repairs have been made.