Marr Scaffolding Company’s (MSC) Mast-Climber Division is active at numerous project sites throughout Boston, providing contractors the necessary equipment and training to efficiently and safely access the facades on buildings. 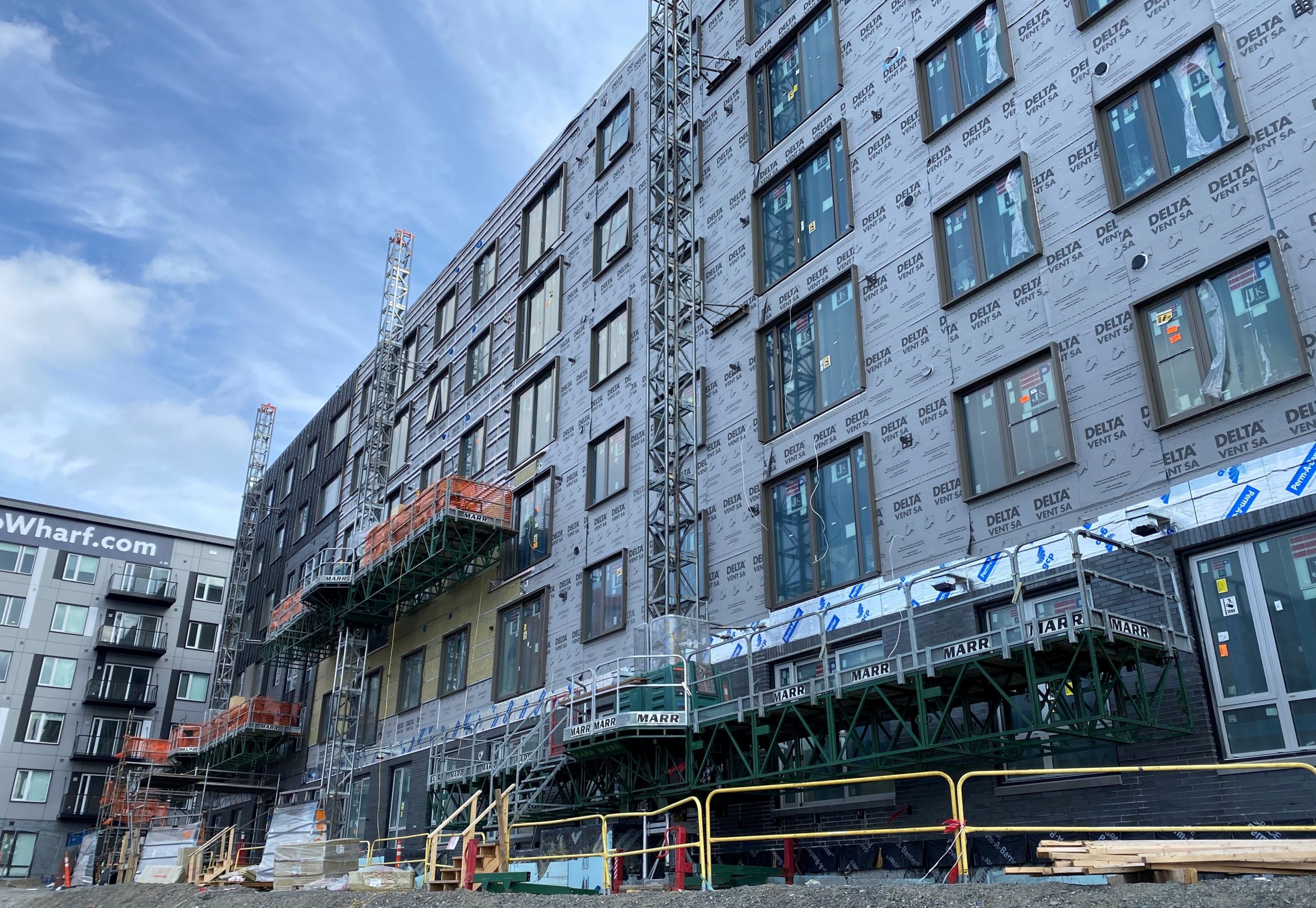 Located on the East Boston Waterfront, Clippership Apartments on the Wharf is a luxury apartment and retail complex set on 12-acres of land overlooking Boston Harbor and the Boston skyline. Breaking ground in 2017, the project is set to transform this underutilized section of the city into a vibrant neighborhood that is also more publicly accessible with the addition of parking spaces and waterfront transportation services.

MSC’s Mast-Climber Division is contracted with Sunrise Erectors to provide access for the installation of the complex’s exterior wall system. Since last November, five F-200 mast climbing work platforms have been installed and relocated around the perimeter of the six-story building to accommodate various trades during construction of the facade. 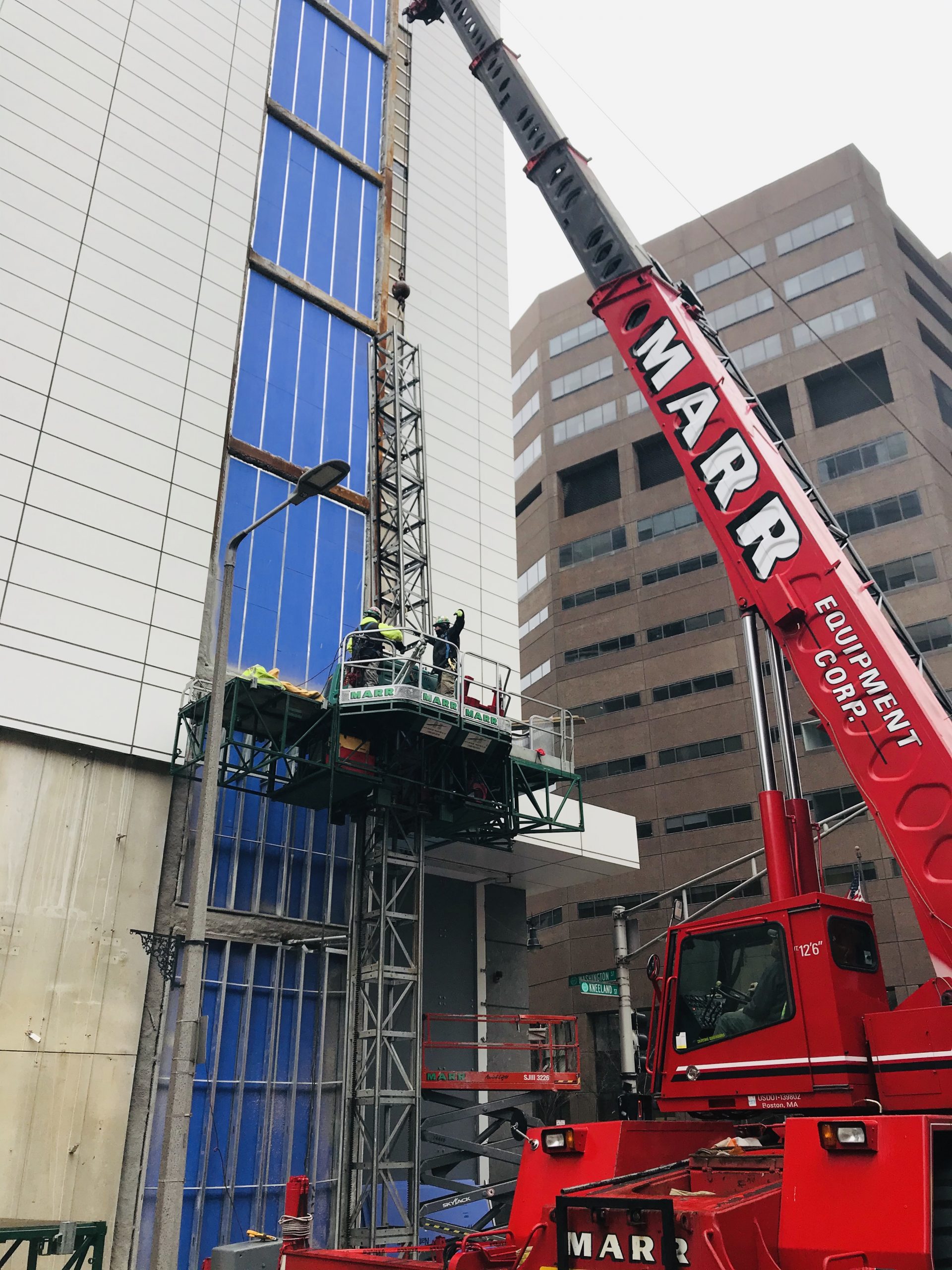 While mast climbers typically tie into concrete on a building’s exterior, Clippership is a wood-built structure, which required Marr to design and engineer a special tie-in system comprised of threaded rods, plates and structural steel channels. Installing this system required careful coordination with the Sunrise Erectors team, who worked from the inside of the building to attach supports to the floors in strategic locations to accommodate the exterior load imposed by the units.

Since their initial installation, the five units have been relocated eight times, involving 13 different positions. Marr conducted Hydro-Mobile Mast Climber training for all workers utilizing the equipment, as well as provided all trucking, crane equipment and project personnel to install, relocate and dismantle the units. The final dismantle is set for March. Lendlease is the project’s GC.

Over at Tufts University School of Dental Medicine located in Boston’s Chinatown, renovations are underway to enhance the lobby space of the 18-story building. The expansion of the lobby creates a two-story foyer with new elevators, among other changes, to improve public circulation and ease accessibility.

Beginning in early January, MSC’s Mast-Climber Division contracted with Ipswich Bay Glass to install a mast climbing work platform to access and construct a 260-foot-tall exterior curtain wall system for a new twin elevator shaft. It was determined that an F-300 mast climbing work platform – with its ability to run in a unique split configuration – would provide the most efficient means to carry all product and personnel in a timely manner to all levels of the building. With its split configuration, both sides of the unit run independently, which gives workers on either side two different access points on the facade simultaneously. This is particularly useful as half the unit needs to maneuver around a canopy on the third floor.

To install the unit within the very tight footprint, Kneeland Street was temporarily shut down on a Saturday so that a crane, provided by Marr Crane & Rigging, could lift it over and within inches of a concrete light pole, utility box and fire hydrant before setting it in place. The remaining 200 feet of tower section were set manually over two weeks, utilizing an attached boom arm.

Marr trained various trades on site to operate the mast climber, which will be in use for six months. Shawmut Design & Construction is the project’s GC.