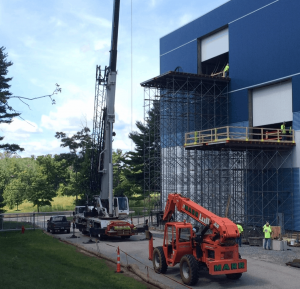 Previously a standalone shell for years, the 97,500sf, three-level building had been outfitted by design to become a manufacturing facility. As such, the building was equipped with roll-up doors on the exterior to accommodate loading platforms for the transfer of heavy mechanical and manufacturing equipment in and out of the facility. For the initial phase of the project, Marr built two different elevation platforms, one standing at 25 feet and the other at 50 feet, for loading materials onto the second and third floors, respectively. Utilizing a Lull from Marr Scaffolding’s Aerial Lifts Division and a crane from Marr Crane & Rigging, Marr was able to meet the critical deadline of constructing the platforms given its various equipment resources and the expertise of its crew. 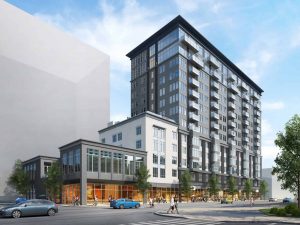 The deck level of the platforms was built with steel covering.

After working with a geotechnical engineer to assess the ground on which the platforms would be built, it was determined that the area was viable to support the loads that would be applied. With this confirmation, a core crew of six (including a foreman, laborers, and carpenters) proceeded to construct the towers using a steel Shore-X system combined with uniformed-sized steel, as well as aluminum joists, at the deck level. The platforms were outfitted with lumber, plywood, and a perimeter guardrail system that were pressure-treated to ensure durability throughout the multi-year rental. Steel plates were also brought in to cover the plywood decks, increasing the capacity of the platforms to a maximum allowable point load of 6,250 lbs. and uniform load of 500 lbs. psf.

According to project manager Chris Madden, a key part of the installation involved securing the two towers so that they would withstand the lateral forces of heavy equipment loads. In order to accomplish this, Marr tied the platforms into the structural steel beam of the building using tube and clamp ties, in addition to guy wires alongside the two structures that tied into concrete barriers below on the ground level. Due to a timely and successful completion, Marr was able to turn over the platforms for active use on time and will regularly service them in addition to conducting a monthly inspection. Marr looks forward to continuing work with IPS at this facility throughout the duration of this project.