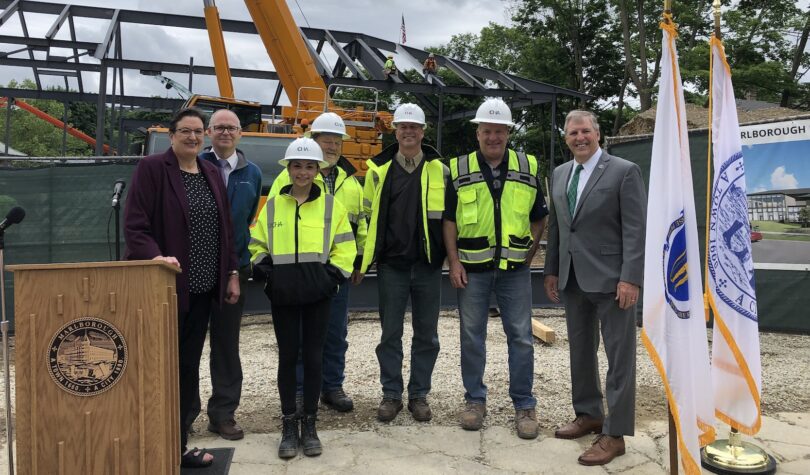 CHA’s OPM project team celebrates the topping off of the Marlborough Public Library with leaders from the city of Marlborough, including Mayor Arthur Vigeant and Library Director Margaret Cardello.

Marlborough, MA – The city of Marlborough recently celebrated a milestone in the renovation and expansion of its historic library with a topping off ceremony. The final beam, signed by many of those in attendance, was lifted into place on the new addition.

Local government officials from the city of Marlborough, including the mayor and city council members, joined friends of the library, state legislators, and residents to mark this moment in the project. Mayor Arthur Vigeant and Library Director Margaret Cardello spoke of the importance of the library to the community and the collaboration making the project possible.

The Marlborough Public Library is undergoing a $24 million renovation and expansion project. Built in the early 1900s and last renovated in 1969, the library lacks room for meetings and quiet study. A phased design and construction plan is expanding the existing facility from 22,300sf to 38,306sf. While most of the existing building was demolished and will be replaced with a new addition, the historic facade and front rooms have been retained and incorporated into the new design.

CHA Consulting, Inc. serves as the owner’s project manager for the City of Marlborough. MOCC is the construction manager and LLB Architects is the designer. CHA also assisted the library with its temporary relocation to a nearby municipal building in Marlborough until the renovation and expansion are complete.

“This library is incredibly special to the city of Marlborough, and we are honored to shepherd this renovation project, retaining historic elements of the past and creating a space that will inspire future generations,” said Tom Gatzunis, CHA senior project manager.

The project is slated for completion in the spring of 2023.