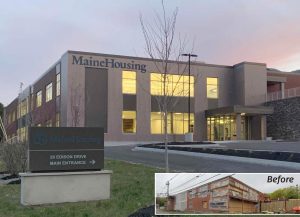 Before and after photos of MaineHousing’s new headquarters

Scarborough, ME – Landry/French Construction, commercial contractors in Maine, is nearing completion on a major renovation of MaineHousing’s new headquarters in Augusta.

Located at 26 Edison Drive, the existing two-story vacant building was purchased by MaineHousing in 2018 to accommodate its growing needs.

Built in the mid-1980s for use as a data center for a financial institution, the 65,000sf brick building underwent extensive renovations to provide a modern, open-office environment for MaineHousing’s 175 employees.

The entire building was completely gutted and updated with all new finishes, as well as new mechanical and electrical systems throughout to bring the building up to code. A new lighting control system was installed, automatically adjusting to outdoor light levels.

In order to provide for the addition of an elevator, an existing 13,000sf section of the building was demolished. The deficient exterior building envelope was replaced with new framing, sheathing and brick, and new large windows and four skylights were added, allowing an abundance of natural light into the offices.

Despite the project’s challenges, including several unforeseen conditions, the discovery of unsuitable soils and ledge, electrical equipment that needed to be replaced, and a deficient exterior envelope, the project will be completed on schedule.

MaineHousing will occupy its new office space in June.