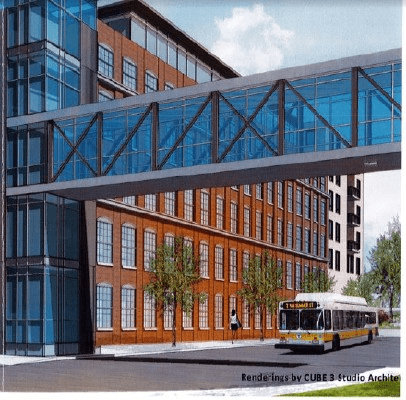 The construction of the 140-ft. pedestrian bridge will connect the third floor of the Charles A. Gallagher Intermodel Transportation Center to the second floor of the new Thorndike Exchange development, built by Lupoli companies and designed by Cube 3 Studio.

The new trusses will be fabricated into two sections, each weighing in excess of 25 tons. Once the trusses arrive in Lowell, it will the responsibility of GTC to coordinate, schedule, and manage how the trusses are erected and finished between the active Gallagher Terminal and the under-construction Thorndike Exchange. The biggest challenge will be logistical concerns, such as setting and finishing the bridge over an active bus and train terminal that shuts down only 4 hours a night.

The new walkway is slated for completion in summer of 2017.

Keith Zybert, vice president of GTC, says, “I am excited and appreciative of our opportunity to work with the LRTA and city of Lowell. It is very gratifying to know that GTC will be part of the team that will build a new functional and recognizable piece of infrastructure for the Transit Authority.” The new overpass will provide a safe and enclosed pathway to residents, commuters, and visitor to the newly constructed Thorndike Exchange, a $40 million mixed-use development built by Sal Lupoli. Inhabitants and visitors to the Exchange will be able to use the bridge instead of traversing the busy streets of the Gallagher Terminal below.