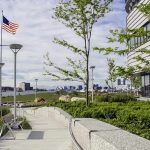 The landscape design at the Spaulding Rehabilitation Hospital

In 2012, Hurricane Sandy provided a stark example of the effects of climate change on coastal communities. While New England was spared from this particular storm, the more gradual effects of rising sea levels are being felt. Mean water levels in Boston Harbor have risen 12 inches over the last century — a trend projected to dramatically accelerate over the next 100 years. Communities previously immune to regular flooding could soon be subject to regular immersion.

Recognition of this climatic shift is beginning to be addressed in the work of Boston’s leading design firms. The recent “Living With Water” competition sponsored by the Boston Redevelopment Authority (BRA), the Boston Society of Architects (BSA), the Boston Harbor Association (BHA), the Massachusetts Office of Coastal Management, and the BARR Foundation challenged design teams to consider practical strategies for addressing sea-level rise in the vulnerable Fort Point neighborhood. Landscape architect Sean Sanger, a principal at Copley Wolff Design Group, was a member of an interdisciplinary team of architects, engineers, and community organizers that developed the “Re/Creation District” entry.

“The competition was an incredible opportunity to come together with a group of design professionals to discuss real challenges that will affect development in Boston in the years to come,” said Sanger. The proposal, as profiled in the Boston Globe, advocates for a series of tidal pools that would use natural processes to filter water and coastal meadowlands that both absorb and retain overflow during periods of flooding. Additional recommendations included the addition of elevated mechanical equipment, planted roofs for agriculture and insulation, and a reconfiguration of traditional ground level entries. 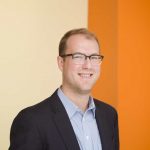 While the “Living With Water” competition provided a chance to develop phased solutions for the future, Copley Wolff Design Group has already begun to consider and respond to the realities of sea-level rise in its recent work. At the new Spaulding Rehabilitation Hospital in the Charlestown Navy Yard, the site’s direct adjacency to Boston Harbor compelled a series of design decisions intended to shield the facility from the full force of the rising tides. The landscape design played a major role in creating this barrier by creating a series of outdoor spaces that use subtle changes in elevation and permeability to slow the energy of a potential storm surge. The sequence of spaces begins at the cantilevered Harborwalk. The lowest point in the site design, this structure was engineered to allow water to pass through during periods of likely submersion. Use of a permeable edge protects the Harborwalk from the types of catastrophic failure seen in New Orleans during Hurricane Katrina while dissipating the energy of the waves as they move towards the building.

Between the Harborwalk and building, the landscape design subtly steps upward through a series of terraces and planting masses. By stepping the landscape, Copley Wolff Design Group’s landscape design not only addresses major practical challenges of designing for sea-level rise, it also complies with the American’s With Disabilities Act (ADA) with the integration of ramps, sloped walks, and stairs. Durable paving materials and a palette of salt-water tolerant plant materials were selected to mitigate damage during periods of major flooding. The complexity of the design was recently recognized by the Boston Society of Landscape Architects, which awarded the project a 2015 Honor Award for Commercial and Institutional Design.

Andrew Arbaugh is a landscape designer at Copley Wolff Design Group in Boston.