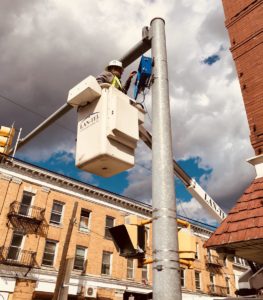 Lawrence, MA – LAN-TEL Communications, Inc., a NECA Boston contractor headquartered in Norwood, has been awarded and is underway with a video surveillance project in Lawrence.

The project entails the installation of surveillance cameras at 35 strategic sites throughout the city. Through the public safety initiative, the city of Lawrence joins a growing list of municipalities worldwide that are integrating state-of-the-art security technology and new surveillance methods to enhance their policing efforts. 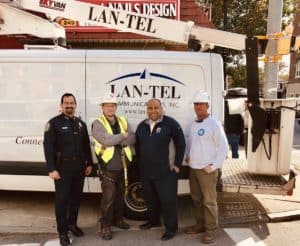 In the project’s first phase, 75 cameras are being installed and maintained by the NECA Boston contractor at various sites throughout the city. Approximately 35 additional cameras will be installed in a second phase. All camera box locations are publicly visible, with camera housing blue in color.

Cameras are aligned and focused to cover the areas of interest, and the integrated wireless antennas transmit video signals back to Lawrence police headquarters. Some of the security cameras offer a fixed 180-degree view of a site, while others have pan, tilt, and zoom features.